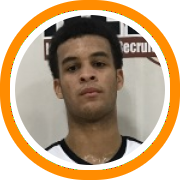 The one and only Mike Yagmin has continued his travels to various prep schools and in the third installment of his first impressions series he provides his thoughts from schools at three different levels - New Hampton School, Loomis Chaffee School and Dexter School.

There's something very interesting brewing in southern New Hampshire. First year head coach Nick Whitmore is emphasizing efficiency in every aspect of the game imaginable, both on and off the court. His players have bought in entirely, realizing that their coaching staff's detailed shot charts and surgical approach to time management puts them in the best possible position to succeed.

New Hampton's most well known commodity, Kimani Lawrence, was visiting Southern Cal on this particular night but it wasn't hard to envision how the tenets of Whitmore's offense would positively impact the explosive 6'6" wing. Proper spacing, the benefit of taking efficient shots, and the importance of ball movement was preached ad nauseam by seniors Anthony Gaines and Kristers Zoriks, who led the group through drills and a few full court games.

Gaines is playing with a renewed sense of confidence after a breakout summer with the Albany City Rocks in the Nike EYBL. Gaines constantly finds himself around the ball, using his explosive athleticism and tenacious energy to beat big men to rebounds both inside the paint and out. His relentless approach and 6'9" wingspan helped him become one of only two players in EYBL history under-6'6" to average 9+ rebounds for an entire season. Gaines also scored 14.7 points and dished out 3 assists a game in EYBL play.

Gaines has also made marked improvements from the free throw line after shooting a respectable 69% from the line this summer. Gaines' new motion employs his lower half perfectly and is ideal for a player who is at his best when he's aggressive and physical on both ends of the court. Fresh off his commitment to Northwestern, Gaines embodied everything a coach would want from one of his veterans, leading both vocally and by example.

Zoriks is noticeably more comfortable in his New Hampton surroundings than he was in the EYBL. Whether it was the role he was being asked to play or his lack of familiarity with his teammates, Zoriks looked hesitant at times during his stint with the City Rocks. After making an extremely intelligent decision to play his college ball in a St. Mary's system that plays to his strengths, Zoriks moved fluidly and consistently put himself and teammates in position to make plays.

Zoriks was extremely productive whether he was being asked to run the offense as a lead guard or to hand playmaking duties over to newcomer Shandon Brown and play off the ball. Zoriks ability to rattle off points from beyond the arch in a hurry is the perfect compliment to Lawrence, Gaines and Brown, a shifty 5'9" junior whose reputation as a prolific scorer was built at Beaver Country Day and on the grassroots circuit with the BABC.

Fellow newcomer Jimmy Boeheim, son of the legendary Syracuse coach, is another nice fit for the New Hampton offense and should find himself playing an important role as an inside-outside threat with great size at 6'8". Boeheim combines with returning 6'10" big man Walker Miller to give New Hampton two of the more creative post passers in the region. Both showed the ability to distribute the ball to cutting teammates and the understanding of how important that threat could be in terms of their personal success as well.

Whitmore has already encountered some hurdles entering his inaugural campaign. Injuries to 6'3" wing Nate Davis (ACL) and 6'9" big man Khalea Turner-Morris have cut into his squad's depth this fall but it has given other players an opportunity to step up. Turner-Morris' return will give New Hampton another weapon in the frontcourt and a bonafide post presence to keep teams from doubling Lawrence, Gaines and Zoriks on the outside.

New Hampton hopes to ride the momentum they created individually over the summer and turn it into team success as they hope to take the next step after earning the top seed in last year's post-season.

An influx of talent to the Windsor, CT campus gives head coach Rock Battistoni the most talented roster of his young Loomis Chaffee career. The most familiar addition to this year's roster is Granby, CT native Jaiden Delaire, who spent this summer playing on the Under Armour Association circuit with the Connecticut Basketball Club.

Delaire is a 6'7" wing whose ultimate prospect ceiling is as high as almost any player in New England. It's easy to dream on a young player like Delaire, given the vast improvements he's made over the last 18 months, his humble work ethic and the genetic gifts he's inherited from an athletic family tree. His cousin, Ryan Delaire, is currently a defensive end for the Carolina Panthers, after a celebrated college career at Towson. He was a versatile and outsanding all-around athlete at Windsor HS (CT) where he played football, basketball and ran track.

Delaire enters the 2019 class and immediately becomes one of their best all-around prospects. He's also the type of player who figures to produce above his skill level, thanks to a motor that never stops and his ability to comfortably handle the ball on the perimeter. Delaire owns a 7-foot wingspan, helping him wreak havoc in the post and get his hands on on rebounds without drawing senseless fouls.

Delaire joins returning 6'9" big/wing Nelson Boachie-Yiadom to form one of the most talented young duos in the NEPSAC this season. Boachie-Yiadom, a 6'9" big/wing in the class of 2018, did some extensive traveling of his own this summer. A native of England, Boachie-Yiadom played for their 16U and 18U national teams and also participated in the Basketball Without Borders event which is sponsored by the NBA and FIBA.

The experience has obviously helped Boachie-Yiadom slow the game down and taught him some of the crafty Euro moves that are becoming increasingly popular in today's game. Loomis also has a few new backcourt pieces that figure to contribute this season as well.

Reggie Gardner, a smooth 6'3" combo guard, comes to the NEPSAC with a chip on his shoulder and something to prove, after a prep career at DeMatha where he was a heralded young prospect and seemed to get lost in the shuffle as the talent around him became more dense. Jesus Cruz, a 6'4" wing, spent his early prep career at Immaculata LaSalle in Miami where he earned all conference honors last season. Cruz can put points on the board in bunches and is an aggressive slasher from the wing. 6'5" wing Brennan Morris also joins Loomis, giving Battistoni another weapon on the perimeter and a veteran presence to lead his talented young core.

Loomis could be a sleeper contender, especially as the season wears on and their youthful exuberance turns to efficient production. At the very least, they'll be a team that nobody will be excited to see on their schedule once the calendar turns to 2017.

This is going to become popular spot for college coaches over the next few years. Head coach George Wright-Easy has a talented young trio of prospects in the 2019 class that will give both fans and scouts plenty of reasons to pack the gym in Brookline.

Charles Coleman, a 6'10" big, is one of the most uniquely skilled players in all of New England and, after missing most of the summer with nagging injuries, will be on a mission to carve out some space of his own at the top of the 2019 rankings this winter. Long, strong, agile and a quick learner in the post, Coleman already has range out to the 3-point line and looked extremely comfortable with the ball in his hands during drills.

Teammates Noah Kamba and Jordan Mason made their mark on the New England prep scene running with WrightWay Skills during the grassroots season. Mason is a 6'3" wing with deep range, an attacking style and improving handle, a set of skills that make him natural scorer and a nightmare for opposing defenses. He's also relatively new to the game, having only played for four years heading into this season.

Kamba, a 6'0" true Point Guard, uses a lightning quick first step and tight handle to blow defenders and get into the paint. Kamba is also the type of natural leader that coaches look for in their floor general. He was constantly encouraging his teammates, barking at them when necessary and speaking calmly when the time permitted.

Together, these three form the foundation of both of Wright-Easy's programs and put them in immediate position to make noise in the NEPSAC and the summer circuit going forward.