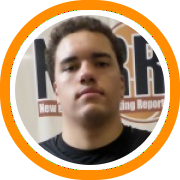 Our tour of open gyms and workouts across New England continues this week with three NEPSAC stops and a workout in Waterbury, CT. Much like last week (click here if you missed Yags' first set of prep impressions), we’ll take a look at the progress made by some of the region’s most coveted prospects while introducing you to a few newcomers to the area.

While Christian David is vigorously working his way back from the torn ACL he suffered in last season’s AA championship game, other returners have made some huge strides and look to fill parts of the void left by one of the nation’s most versatile players. Despite not being cleared for full basketball activities, David continued his relentless rehab on a stationary bike near the sidelines. David also measured in with a 6’10” wingspan and did a few band workouts without any signs of discomfort.

Marcus Santos Silva has made the biggest leap since last season, first proving to be an elite rebounder for the BABC this summer and now working his way into a trimmer physique. As opponents have come to realize, Santos-Silva is solid as a rock but he now sports a leaner frame that accurately reflects his power.

I originally measured Santos-Silva’s wingspan at 7-feet even back in late June. He and teammates Corey Romich and Bailey Patella had just walked through the door to participate in the Elite 75 College Showcase at Brandeis. The BABC teammates were among the first set of wingspans I grabbed this summer. But I’ve now come to realize that there’s at least a 1-to-2” difference between a player’s wingspan when they’re ice cold and when they’re warmed up and have a proper game flexibility going. Sure enough, Santos-Silva’s wingspan measured in at 7’1.5” this time around.

Patella brought the competition level up a few notches during the scrimmage portion of VA’s open gym, using his elite motor and uncanny ability to make back-breaking plays at the most demoralizing moment to his opponent. Whether it was a tipped pass, blocked shot or game-winning trey, Patella found ways to keep his team on the court for the overwhelming majority of the night. Patella could see his recruitment rise as the season wears on, when mid-major programs that are looking for a steal late in the process and their coaches get second or third looks at his inherently valuable abilities. He’s got the skills, length (6’9” wingspan) and athleticism to defend three or four positions on the court.

To steal a great term coined by Northfield-Mt Hermon head coach John Carroll, Patella is definitely more of a book than a tweet (a player who’s an obvious stud with freakish physical gifts) or an article (a player whose value is noticeable after a couple looks) as a prospect. Once you realize that his intuitive backdoor cuts are a common occurrence; that his bounce and athleticism are now legitimate weapons that he uses to rise up on sleeping defenders in the paint; and that the energy and passion he brings to the court doesn’t fluctuate depending on the level of his opponent, you begin to understand that Patella is simply a winner with the requisite skill set to become an impact player at the college level.

Romich‘s performance with the BABC has obviously given him a heightened level of confidence. Romich was scorching hot from beyond the arch the night we visited and is just an extension of his success on the Nike circuit, where he finished tied for 7th in the EYBL with 37 3-point field goals. The three players he was tied with are all elite nationally-ranked recruits; Gary Trent Jr (#8 in ESPN-100), Brandon Randolph (#40) and 4-star Wisconsin-commit Brad Davison. Romich could see a ton of open looks considering the talen that surrounds him on the VA roster. It’s now reasonable to expect those open looks to turn into points on the board at a very high rate.

The college commitments of Santos-Silva (VCU) and David (Butler) were announced later in the week but not before Kansas State’s Bruce Weber and Creighton’s Greg McDermott made their final sales pitches the day we visited campus. The talent level of a few incoming prospects all but guarantees coaches from high major programs will become familiar with the Vermont backroads over the next few years.

KEY NEWCOMERS: Simi Shittu, a consensus top-10 prospect in the 2018 class, comes to Vermont after spending his first two seasons at national powerhouse Montverde. The 6’10” Canadian has tremendous size, a nonstop motor and the elite athleticism to play/defend all five positions on the floor. Shittu is an unselfish star who mixes superb vision with explosive dribble-drive ability that allows him to get into the lane at will. One of the players Shittu consistently found for open shots was 6’8” fellow newcomer Jordan Nwora. A 4-star recruit who was ranked 91st in the latest ESPN 100, Nwora’s star rose during the summer running with the NY Rens and only became brighter after a fantastic week at Adidas Nations. Nwora is knock down shooter, very good rebounder and gets to spots on the floor by implementing long strides and sneaky quickness.  He recently picked up offers from Louisville and Texas Tech after receiving offers from Georgia Tech, UConn, Cal, Memphis, Florida St, Florida, Northwestern and handfuls of other high major programs throughout the summer.

After graduating big man Jordy Tshimanga (Nebraska) and four other D1 players last season, head coach Jacque Rivera had a dual purpose while restocking his roster for the ‘16-’17 season. He eyed productive young players with enough talent to compete in the NEPSAC immediately but who also had high ceilings and could be the foundation of his program moving forward. Consider Rivera’s offseason a success.

With the addition of two 2019 prospects, 6’7” Ismael Massoud and 6’5” Dalano Banton, MacDuffie now features the biggest and best young backcourt in New England.

Massoud earned a reputation as a player who wasn’t afraid to take and make clutch shots late in the game during his first two seasons at Cardinal Hayes in the Bronx. His wide frame still has to fill out physically but he already features a 6’11” wingspan and has the present ability to defend three or four positions on the court. Massoud’s handle is smooth, his play-making ability is unique and, even though he has a NYC floor general’s swagger, he’s far more reliant on fundamentals than he is flair when it comes to producing for himself or his teammates.

Banton comes to MacDuffie from Canada and has been hailed as one of the most talented young guard prospects the country has to offer. He’s also versatile enough to slide over and create from the wing, which both young players will have to become accustomed to in order for their team’s offense to succeed. Banton thrives in transition, using his height to see over the top of defenders and deliver pinpoint passes to open teammate on the break.

Rivera’s dynamic new backcourt will undoubtedly go through some growing pains early in the NEPSAC season but their rivals across New England better get their shots in while they can. Because once Massoud and Banton become comfortable with their roles as the leaders of this young MacDuffie squad, their potential to be the most formidable backcourt duo in the region may become a reality sooner rather than later.

KEY NEWCOMER: Even though we mentioned two newcomers above, Massoud and Banton are considered grizzled basketball vets when compared to Cameroon-native Frank Kepang. The 6’8” big man comes to MacDuffie as part of their 2020 class and brings a ton of upside. Kepang has elite length (7’3” wingspan) and moves with gracefully quick quiet feet, something that always shocks the basketball community when they belong to a player of his size. But it’s also something we should come to expect from young men who spend the first 15 years of their life on the soccer field. Kepang also owns the hands of a soccer player right now but is improving by the day, quickly learning how to apply his physical gifts on the court.

Redemption is another team that makes up for their lack of basketball experience with tons of length, strength and athleticism. RCA will be able to get out and run with anyone in New England. If their abilities translate in their half court sets, they’ll be a team that nobody will enjoy playing this season.

Chris Duarte was visited by Hofstra and Boston College the day I was on campus. Blessed with great size as a primary ball handler, Duarte’s game has matured and has become more efficient and even tougher to contain.

Duarte had an up and down summer with the NY Lightning in the Nike EYBL which was partially due to injury. He’s back at 100% and showed off the bounce that has some high major programs vying for his services. Duarte’s versatility is one of his best assets and allows him to play on or off the ball depending on the talent around him. He’ll be asked to lead an equally young and exciting squad this season.

2019 big Bernard Kouma came away as one of the risers at the Elite 75 Frosh/Soph earlier this fall and looked even more impressive in comfortable surroundings. Kouma gets up and down the floor effortlessly, constantly flashing his huge hands when he’s open in the post and acting as a rim protector defensively. At 6’9” with a 7’2” wingspan and 9’1.5” standing reach, Kouma has the physical measurements that high major programs look for in their big men. Skill development, experience and work ethic will now become the x-factors in his prospect evolution.

KEY NEWCOMERS: Anderson “Big Baby” Mirambeaux, Jerry Iliya and Anderson Gomes give Redemption a trio of players that flashed silly athleticism given their individual body types. Mirambeaux is a thick 6’7” bull who invites physical play, grabs boards over bigger players by using his 7’1.5” wingspan and is the perfect complement to Kouma in the post. Iliya, another big winner at our Elite 75 event, tries to dunk everything and has the makings of an impact wing defender with a 6’3” frame and 6’11” wingspan that can engulf opposing players on the perimeter. Meanwhile, Gomes showed off his aerial acrobatics during an impromptu Dunk Contest that RCA’s players insisted upon having me judge after practice. Despite practicing for two hours directly after a long morning flight, Gomes was still able to put the incredible bounce he packs into his 6’2” frame to good use and leaned on his 6’8” wingspan for whatever his jetlagged legs couldn’t give him. I was more than happy to play my role and came away impressed, not only by RCA’s athleticism, but by their positive energy and the genuinely good souls that make up their program. It’s hard not to root for these young men to succeed in hoops and in life.