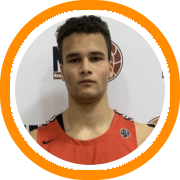 His high school career started at Cambridge before making the move to St. Sebastian’s School this past fall. He was a starter his first season on an Arrow’s team that went 23-3 and won the Independent School League Championship.

His ability to fit right in at St. Sebastian’s caught the eye of Expressions, allowing him to get an opportunity to play on the Nike EYBL circuit this spring and summer. Wright was a key player on the talented squad which won EYBL’s Pool D. He made an impact as a floor spacer and defensive rebounder, while also regularly doing the little things that do not always show up on a stat sheet.

Wright took advantage of his opportunity at the NERR/Zero Gravity Northeast Hoops Festival in the spring. He earned a spot on the All-Academic Team and hit six treys in one of his games.

"I could not be happier for Cooper," said St. Sebastian's head coach David Hinman. "He has worked incredibly hard for this moment and is going to have a great impact on the Colgate program. His defensive versatility and ability to score at all three levels will make him a perfect fit for the Patriot League."

"Cooper is a tremendous character kid who any team would love to have," said Expressions program director Todd Quarles. "He is a long wing that has very good athleticism and a high ceiling. He has an incredible offensive impact without having plays called for him. Cooper knows how to score within the framework of offensive systems."

"He is just scratching the surface while being a tremendous teammate. That goes with having a high IQ and great feel that contributes to winning. Cooper can also guard 1-4."

Wright is the third member of the Arrow’s 2023 class who has finalized their plans to play college basketball next year.