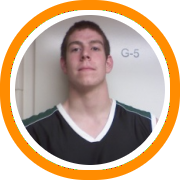 Winchendon’s post-graduate center Adam Kemp ended his recruitment on Monday afternoon when he made a verbal commitment to Marist College and head coach Chuck Martin.

The Red Foxes had been actively recruiting the big man since this summer and when they finally extended a scholarship offer it didn’t take Kemp long to make up his mind.

“I started talking to Marist last year during my senior year of high school,” Kemp explained.  “When I got to Winchendon a couple of other schools offered, but once Marist offered I knew that was the place where I wanted to go.”

Kemp came to Winchendon from Vernon Verona Sherrill High School in New York, about two and a half hours away from Marist’s campus in Poughkeepsie, New York, and the opportunity to play his college basketball fairly close to home was one of the things that appealed to Kemp.

“I had a good relationship with [head] coach [Chuck] Martin and [assistant] coach [Ty] Weeks,” he said, “and it’s a good academic school.  That’s one thing about me, I needed to find a place that fit academics and basketball.”

Kemp averaged 15 points and 10 rebounds last season at VVSHS, earning numerous post-season accolades in the process.  At Winchendon, he is a rotation player for one of the deepest and most talented frontcourts in all of the NEPSAC.

The Marist coaching staff followed Kemp consistently last summer, being sure to make an appearance at each of his stops along the way.  They have also been a consistent fixture in the Winchendon gym this year, as Coach Martin himself has made three or four different trips to see the Big Green play.

He is also the second New England big man to commit to Marist for next season joining Wilbraham and Monson center Naofall Folahan.