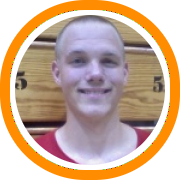 Nick Meunier was the leading scorer in the division I & II game as he scored 18 points while getting the chance to show off his shooting range from the perimeter.  Clancy Rugg finished with 15 including two thunderous dunks coming off passes from his Burlington teammate Shane Norris.  Marcus Dutkiewicz chipped in with 9 while John Donnelly added 8.  The South squad was paced by Austin Bicskei from Miller River, Peter Francis from Bellows Falls, and Jake Lapan from Woodstock who all finished with 8 points.

Billy Vasiliadis led the way in the division III & IV game as he scored 20 points showing his ability to put points on the board in a variety of different ways.  Cody Chamberlin from Northfield and Liam Walsh of Stowe kicked in 11 a piece for the North while BFA Fairfax’s Seth Rebeor and Lake Region’s Jordan Poutre both added 7.  The South was led by Thetford’s Jason Grey and Black River’s Bobby Rohrig who both scored 9.  Charlie Jobin from Blue Mountain and Ryan Carter from Proctor had 8 each.

The Vermont Basketball Coaches’ Association also handed out their season ending awards, including the state’s most valuable player.  This year that distinction went to Burlington senior Clancy Rugg.  The 6’7” forward averaged over 17 points per game as he led Burlington to an undefeated regular season before falling in the division I final to Rice.