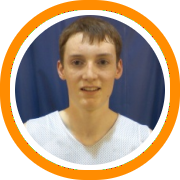 The Vermont Basketball Coaches Association held their annual North-South Senior All-Star Classic on Saturday at Windsor High School.  In addition to four all-star games (two boys and two girls) featuring the top seniors in the state, the VBCA handed out a number of awards honoring the state player of the year, coach of the year, and “Dream Dozen” list featuring the top underclassmen in the state.

To no one’s surprise Burlington senior guard Joe OShea was named the player of the year after leading his team to their third consecutive state final.  O’Shea, who signed his National Letter of Intent with Holy Cross in the fall, scored close to twenty points per game in his senior year and has been one of the marquee players in the state for the last three years.

The thirteen players selected for the Dream Dozen will team up this summer to take on the best underclassmen New Hampshire has to offer in the annual Merchants Bank Rotary Twin State Basketball Classic.

Demir Smajovic was the star of the first game as he scored a game high 26 points for the north.  O’Shea was the only other player to crack double figures with 10 while Connor Merrill and Josh Stewart were not far behind with 9 and 8 respectively.  Christian Doran led the South with 13 while Kyle Callanan had 11.

The north utilized a balanced offensive attack to take the division III & IV game as Billy Boyd scored a team high 10 points before going down with an unfortunate ankle injury.  Emmitt Hackett was next in the scoring column with 9 while his Lake Region teammates Richie Hackett and Travis Terrell joined Jeremy Lawrence and Billy Ross in scoring 8 points each.  Scott Hayford led the South with 11 while Jake Bielecki had 9 and Adam Daley and Tyler LaFreniere 8 each.