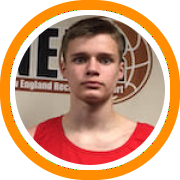 Whitinsville Christian School and Mass Rivals big man Justin Vander Baan made a verbal commitment to Boston College while on their campus for an unofficial visit.

The Eagles offered the local product over a year ago, following the 2018 July live period, and have continued to recruit him hard since.

Vander Baan first appeared on the radar a couple of years ago when he played with Mass Chaos and was the biggest pleasant surprise at the 2017 New York Elite 75 Academic Experience. He joined WrightWay Skills last summer after having grown a couple of inches and immediately began to intrigue additional college coaches with his size, ability to change ends, soft hands, and dexterity around the basket.

This spring he joined the Mass Rivals and made his first appearance on a national sneaker circuit, while continuing to develop his tools and also showing the first signs of extending his touch away from the basket and possessing some long-term floor-spacing potential.

Vander Baan may not be physically ready for the ACC next year as a freshman, and so he'll need some time to develop his body and adjust to that level of competition, but his long-term potential is clear if and when he can put all of his tools together.

Ashton-Langford's younger brother, DeMarr Langford, is a top priority for the Eagles in this class and set to take his first official visit to their campus this weekend.