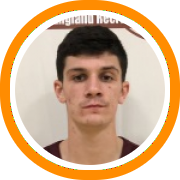 King is an NCAA division II school in Tennessee that competes in the Conference Carolinas.

Murray confirmed his decision via twitter on Sunday night.

I’m proud to announce my commitment to King University! Thank you to everyone who made this possible! pic.twitter.com/C5lwtIdvIw

"Tyler Murray was extremely consistent for us last spring and summer and is easily one of the hardest working players we have ever had in our program," said RAB director Brendan Carter. "Ultimately, Tyler's recruitment was a direct result of the maximum effort he put into his game outside of just playing in tournaments. He was in the weight room, working with personal training, going to showcases, etc... King University is getting themselves a true competitor."

Following a strong summer with RAB, Murray put up 12 points and 7 rebounds per game this winter for a Tabor team that again qualified for the NEPSAC tournament. He also shot 38% from behind the three-point line.

"I'm happy for Tyler and his family," said Tabor Academy head coach Chris Millette. "He navigated the college process as well as anyone I've ever coached, considering all of his options and keeping an open mind. He's a hard-working kid and it paid off."

Below are some of his highlights care of LW Productions.