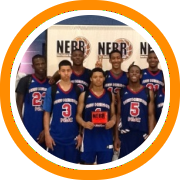 New London, Connecticut – A loaded seventeen-and-under field produced dozens of heart pounding games this weekend, but none was more exciting than the final seconds of the championship game between the Rivals Basketball Club and New Heights.

Trailing by three with just 20 seconds to play the Rivals got the ball to Noah Vonleh, who perfectly executed a drive and kick play to free Jeremy Miller for a game tying three-pointer.

New Heights would advance the ball and call a quick time-out where head coach Kimani Young drew up what proved to be a perfectly executed sideline-out-of-bounds play as Chris Obekpa delivered a high-low pass to Jalen Jenkins for a buzzer beating lay-up.

Obekpa and Vonleh dominated action, not just in the final moments of the championship game, but literally every second they were on the court this weekend.  Obekpa was an incredibly dominant defensive presence, proving why he is arguably the highest priority target left unsigned in the national class of 2012.

Vonleh came up with a game winning dunk in the semifinal as he flew in from the perimeter to catch a tip dunk off the offensive glass to send the Rivals to the final.  The talented forward backed up his spot as a consensus top player in the national class of 2014 as he seems to be adding new weapons to his arsenal on a weekly basis.

Mohammed Ahmed (New Heights) – A 2014 prospect with a high ceiling, Ahmed has great size and length on the wing along with a quick first step that he utilizes to put pressure on the defense and attack the basket.

Jahlil Askew (Drive 4 Stardum) – Askew cracked our prospect page with an impressive showing this weekend.  The long lefty gets into people defensively and has a knack for getting to his sweet spots on the offensive end.

Chris Baldwin (Rivals Basketball Club) – Playing up at the u17 level, Baldwin stole the show on Saturday, bringing the crowd to their feet on consecutive hammer dunks while showing the size and raw natural ability to be a potential star.

Hakeem Baxter (Huntington Park) – An aggressive point guard with an old school feel for the game, Baxter does his best work slashing to the basket but has become a much more consistent threat from 20 feet with his jumper.

Garet Beal (Maine Athletic Club) – The powerful mismatch forward can attack defenses in a variety of different ways with a well developed skill set, high basketball IQ, strong body, and good understanding of how to play the game.

Michael Bourke (New Heights) – A sharp-shooting guard who popped the nets up all weekend for New Heights, Bourke has deep range on his jumper and is capable of making shots in bunches once he gets hot.

Jordan Butler (Connecticut Select) – He’s a basketball player in a linebacker’s body and that’s a bad recipe for opposing frontcourt players as they can literally bounce off Butler at times.  All in all, this was his best performance of the spring.

Alain Chigha (Westchester Hawks) – An intriguing talent who spent the past season at the Rock School in Florida, Chigha is reportedly planning to head north for prep school next year and has all the tools to be a D1 priority recruit

Charles Correa (Rhode Island Hawks) – He’s a scoring lead guard who is a perfect fit with this heady Hawks squad because he’s free to do what he does best – drill long range jumpers and attack the basket with his dribble.

Tony Dobbinson (Connecticut Elite) – An attacking point guard who is quick with his dribble, a blur in the open court, and makes great use of speed on his hesitation moves.  He breaks full court pressure with ease and creates offense for himself and others.

Kahlil Dukes (Connecticut Basketball Club) – There wasn’t a better scoring guard in the field as Dukes had his total offensive arsenal clicking on Sunday, almost single handedly willing CBC out of their quarterfinal game.

Anthony Durham (Huntington Park) – He brings power to the backcourt as a true combo who can bully defenders and carry his man on his back to the rim.  Durham also sees the floor and has a steady diet of D1 interest.

J.T. Elmendorf (Saugerties Sonics) - Elmendorf is a versatile guard who played a role as one of the team's primary offensive options this weekend while also showing veteran leadership as a rising senior.

Remi Ferrall (Connecticut Gold) – The newly named prospect provided a physical presence inside the interior while battling for rebounds, loose balls, and tough finishes while also showing an ability to step out and make a 15 footer.

Dimitri Floras (Rivals Basketball Club) – Tough, crafty, and skilled, Floras set the tone in the backcourt by making contributions in a variety of different ways and had one of the better all around performances we saw this weekend.

Jordan Fuchs (Westchester Hawks) – Making his debut in a Hawks’ uniform this spring, Fuchs combined power and athleticism to impact the game inside the lane as well as in the open floor as one of his team’s primary contributors.

Daniel Garvin (Connecticut Basketball Club) – Without question the best performance we’ve seen from Garvin this spring on the grassroots circuit, the athletic forward was bouncy, active, and productive on both ends of the floor.

Eric Gendron (Rivals Basketball Club) – He was good at the Northeast Hoops Festival and better here as Gendron has now settled into his role with this club and was able to show his talent and playmaking ability in the open court.

Dontae Gittens (Connecticut Select) – He’s got “upside” written all over him as he’s long and still filling out what promises to be an impressive frame.  He owns a clean stroke from downtown and has a knack for making plays with the ball in his hands.

Ray Harris (GHPA Youth) – Balance was key for the GHPA Youth team this weekend but Ray Harris stepped up as a guy worthy of individual recognition by making things happen inside and out as well as on the glass.

Mustapha Heron (Connecticut Basketball Club) – It’s hard to deny that this 8th grader has officially arrived.  He’s not just playing at the u17 level, he’s producing at that level, and against the highest levels of competition possible.

Sayvonn Houston (Bomb Squad) – The burly big man from Brockton was a man among boys at various points this weekend, throwing his body around inside the paint and abusing many opposing big men around the rim.

T.J. Huggins (Mid-Atlantic Select) – Previously committed to Navy, Huggins is now among the best available in the class of 2012.  The long lefty wing was among Mid-Atlantic Select’s most consistent scorers and all-around producers this weekend.

Jalen Jenkins (New Heights) – This young senior remains one of the best still available in the national class of 2012, he’s long athletic and able to create constant mismatch problems with his ability to play off the bounce.

Daquan Johnson (Albany City Rocks) – The City Rocks advanced all the way to the semifinals, picking up wins over CBC-Donnelly and Mid-Atlantic Select along the way, and Johnson’s leadership and playmaking in the backcourt was a big reason why.

Victor Joshua (East Coast Elite) – One of the best available guards left in the class of 2012, Joshua has a smooth cross-over and lethal pull-up to score over top of defenders along with a jumper that is becoming more of a weapon.

Rakwan Kelley (New Jersey Pirates) – He does a little bit of everything for this Pirates team.  He’s starting in the backcourt so he’s scoring and handling the ball, but he’s also a good rebounder and defender who can check multiple positions.

Chris Lee (Middlesex Magic) – He brings the power to the power forward position while also combining explosive athleticism and some deceptive touch.  He scored from 15 feet and in and was an absolute menace on the glass.

Hassan Martin (New Heights) – The athletic big man showed why he is a highly coveted division I prospect this weekend combining power with athleticism and even a sneaky bit of mid-range skill to make a consistent impact.

Kwanique Martin (Brooklyn Rens) – An athletic and cut-up power forward type big man, Martin provided a consistent scoring presence from 12-15 feet in while also proving a live body around the rim on the defensive end.

Christian McCue (Maine Premier) – He is a skilled and scrappy guard who turned in his second solid performance in as many weeks.  He’s heady with the ball in his hands, able to make open shots, and even come off screens.

Fabian McDonald (Brooklyn Rens) – One of the more proficient pick and roll guards in the field, McDonald turned the corner at will and thrived with his ability to pass off the dribble as well as pick up 94 feet on the other end.

Jeremy Miller (Rivals Basketball Club) – He saved his best for last as Miller rose to the occasion on Sunday, not just drilling the game tying three-pointer in the finals but being generally more active inside the paint.

Jalen Myrie (Mid-Atlantic Select) – The Lawrence Academy guard had a very solid showing from start to finish, utilizing his versatile tools to score the ball and impact the game in a variety of different ways from both guard spots.

Trevon Perry (CT Select – Will) – Perry made a name for himself at the Northeast Hoops Festival and backed it up here, using his athleticism to cover the court defensively and gets buckets at the rim on the offensive end.

Chris Polanco (New Heights White) – With great size and length on the wing along with a smooth skill set, Polanco is the type of prospect who immediately attracts your attention.  He backed it up with a solid weekend of work.

Harry Rafferty (Middlesex Magic) – The sharp-shooter is transitioning from the two to the one and looked especially good doing it this weekend.  He was steady with the ball, confident in his decisions, and (of course) able to drill deep jumpers.

Robert Skinner Jr. (Connecticut Passion) – He’s a fundamentally sound six-foot guard from Gilbert High School who leads the way for Connecticut Passion.  He can score, handle, and distribute – and does a little of each for this squad.

Galen Smith (Team Jersey Elite) – A point guard who has improved by leaps and bounds since his team competed at this event a year ago, Smith is a graduating senior heading prep at CJEOTO where we expect him to snag some scholarship offers.

Kurt Steidl (CBC-Donnelly) – The versatile forward had his total game going this weekend, scoring from all three ranges and showing a total floor game that seems to be evolving and developing on a consistent basis.

Shawn Strickland (Drive 4 Stardum) – This playmaker runs the show from D4S and makes his impact felt on both ends of the court.  He runs the team but can still create his own offense, pressures the ball defensively & creates tempo.

Harrison Taggart (Rhode Island Hawks) – He’s a swingman who thinks the game like a point guard and can play a bit of a point forward type role for this club.  Taggart is a heady and crafty player who is an excellent passer.

Andrew Tyrol (Shoreline Shooters) – Tyrol raised the level of his game throughout the weekend to lead the Shooters in scoring for their final two games while also defending the opposition’s most dangerous scoring guard.

Danny Upchurch (Westchester Hawks) – He brings a veteran mentality to the point guard position for the Hawks, running the show and playing a pass first style but still able to make a play off the bounce when the situation warrants it.

James Vice (Albany City Rocks) – A five-foot-eleven guard from Notre Dame Bishop Gibbons High School, Vice is the unique defender who can pick up and pressure the ball for 94 feet.  Offensively, he’s a slashing playmaker who puts opposing defenders in jail.

Casey Woodring (CBC-Donnelly) – He was on fire with his jumper from start to finish this weekend, raining threes from all angles and floating in tear drop runners inside the lane to give his CBC squad a spark of instant offense.