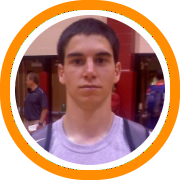 Coming into the day with a 1-1 record in the gold bracket, the Connecticut Basketball Club scored a slim victory in their final pool play game of the day when Phil Gaetano drilled a game winning three-pointer at the buzzer to defeat YOMCA 62-59.  The win sent CBC to the prestigious gold bracket, featuring the top 18 teams in the 32 team gold pool.  Unfortunately for CBC their success was short lived as the CP3 All-Stars knocked them off later in the day, ending their run at the Super Showcase title.

After pool play had concluded New England was well represented in the silver bracket with Maine Gold, Expressions, and Boston Warriors all winning their respective pools and moving on.  While Maine Gold was knocked off by a talented Jersey Shore Warriors team, Expressions dealt Bama Boys a pounding in the opening round of bracket play while the Warriors did the same to Team Shockaz to stay alive heading into Monday's action.

Connecticut Select and Middlesex Magic locked up in the opening round of the bronze bracket, after both finishing second in their pool.  In a rematch of a game played less than two weeks ago at the Super 16 showcase, the Magic scored a 79-72 victory as Pat Connaughton had his latest huge game with 38 points and 20 rebounds, following up on back to back 28 point performances in pool play.

Jerome Harris and Pat Ackerman are two players who also reportedly starred in pool play for Select and Magic respectively.  Harris went for 8 three-pointers and 30 points in Select's second win of the pool play while Ackerman had 16 points, 12 rebounds, and 8 blocks vs. Indiana Spiece Gym Rat and 18 points and 12 rebounds vs. Nike Team Florida Blue.  Jesse Pagliuca, Max Masucci, and Anthony Barry continued to produce in their roles for the Magic as well as Pagliuca had four first half threes and Masucci 11 second half points against Team Florida while Barry continued to lead the way defensively.

Also alive in the bronze bracket was Metro Boston who received a big performance earlier in the day from Zach Chionuma to help them earn a second place finish in their pool.

The New England Playaz, Mass Rivals, and Connecticut Knights all found themselves in the gold bracket of the Adidas Super 64 after the Playaz went 2-1 in their Super Pool and the Rivals and Knights both won their pools to advance to the top bracket.

Markus Kennedy was the latest member of the Playaz squad to draw national media attention as Scout.com's Evan Daniels said Kennedy "flat out got it done" when he watched, finishing around the basket and showing his trademark passing skills.

Jordan Laguerre continued to be the story for the Rivals, scoring as many as 28 points in one game as they swept through pool play, but Scott King continues to see his stock soar through the roof as he led the way with 18 points against the North California Outlawz.

Unfortunately the Playaz fell to Arizona Magic Pump n'Run in the gold bracket while the Knights and Rivals also had their championship aspirations ended on Sunday.