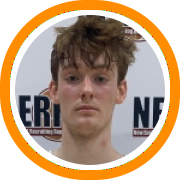 The first state champions in New England were crowned over the weekend in Maine as Hampden Academy, Caribou, Winthrop, and Forest Hills captured gold balls.

Hampden overcame a double-figure deficit late in the third quarter before responding with a decisive 23-1 run that would secure them the state championship and ruin York’s bid for an undefeated season.

Click here for the full recap from the Bangor Daily News.

Caribou needed a pair of overtimes to fight off Maranacook 73-71 on a Sawyer Deprey game-winner than was assisted by his brother Parker.

The brothers led the way throughout scoring 22 and 15 points respectively. Maranacook’s Cash McClure scored a game-high 33 points, including 26 after halftime.

This was the second consecutive state championship for Caribou.

Parker Dejardins led the way with 31 points, including 16 straight for the victors in the second half, and 10 rebounds. Younger brother Mason Desjardins had 18 points, 5 assists, and 4 rebounds while Hunter Cuddy added 16.

A young Machias squad was led by 16 points and 7 rebounds from sophomore Kashman Feeney while freshman Shane Feeney added 12 and 6.

Click here for the full story from the Bangor Daily News.