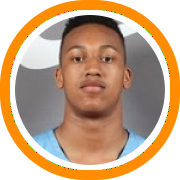 Before he arrived in New England, Paul Newman was the center for the most dominant high school team in Philadelphia.

Roman Catholic High School won back-to-back PIAA AAAA State Championships in Pennsylvania. Shortly after his senior season, almost a year ago to date, he committed to Brown and announced he would be spending a post-graduate season at nearby St. Andrew's.

The season came and went with Newman remaining committed and impressing on the New England prep world what those in Philadelphia already knew, he had magnetic hands, great touch, and the ability to rebound balls in bunches. He finished the season having averaged 16.8 points, 12.5 rebounds, and 1.5 blocks while helping the Saints to their latest 20 win season.

When he was forced to re-open his recruitment earlier this month there was no doubt he would have plenty of suitors, and last weekend he was already on an official visit to Bucknell.

A couple days later, his recruitment was over again as quickly as it had opened up as he was pledged to the defending Patriot League champions.

"I am very excited to welcome Paul to the program," Bucknell head coach Nathan Davis said. "He is a tremendous fit for Bucknell in terms of what we are trying to do academically and athletically. Paul has a great opportunity to come in and compete with experienced low-post players like Nana Foulland and Zach Thomas, who know what it takes to be successful. Paul comes from high-level high school basketball programs, where he had a chance to compete against top-notch competition on a nightly basis."

Newman is the third St. Andrew's frontcourt player in the last two years to earn a division I scholarship as he follows Sammy Friday (Siena) and Cian Sullivan (LaSalle) from the 2016 class.