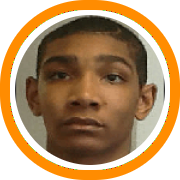 While the level of high-school talent at Scott Hazelton Camp on Monday has already been documented on NERR, what has yet to be revealed until now is that in addition to the high school-aged guys, there was also a whole lot of middle school talent in the building.  Let's take a look at what went down on Day One of Camp.

Leading the middle school contingent was Jermaine Samuels, who, less than five minutes after he walked in the gym, was thrown out on the floor on a squad with Kaleb Joseph, Carson DeRosiers, Jalen Adams, and Jacquil Taylor in a match-up against a team of equal talent.  Many would hypothesize that any 13-year old thrown into this type of jungle would be overwhelmed…Not Mr. Samuels.

In a packed gymnasium, Jermaine made the most of his opportunity on center court by holding his own physically and making plays all over the floor.  Having already established himself as one of New England's premier middle school players, Samuels took it to a whole new level on Monday by translating his game to such a high level of play.  The kid has all the tools to develop into a great player.  it's going to be a lot of fun to witness his development.

Samuels was not the only middle school player who made waves in a packed-gym on Monday.  Two big-men who impressed in the paint and showed tremendous potential as prospects were DeAndre Leslie of Brockton and Nick Osarenren of Boston.  The stand-out performers on the wing were Shyheim Hicks and Ghared Boyce, both of whom can flat-out score the rock as well as Thomas Mabine, an athletic wing who slashes to the basket and defneds with physicality out on the perimeter.  On to the back-court, where Jamari Venterturned heads by making a number of explosive plays and Geo Baker again showcased his niche which is his ability to run a talented club crisply from the point while also serving as a knock-down three point threat.

After an exciting first day, the second day of Scott Hazelton Camp on Tuesday was another in which a lot of slick action went down.  While Jermaine Samuels grabbed the headlines on Monday, Shyheim Hicks grabbed the torch next and wowed the gym on center stage, going to work off the dribble and showcasing a  wealth of ability with the ball in his hands.  Shyheim competed hard on both ends and no problem going right at players much older players.  Overall on the day, Hicks turned a lot of heads and made an impression as a guy who's going to make a lot of noise as a prospect in the coming years...Deandre Leslie has also turned a lot heads this week.  Standing around 6'5, Leslie has a body which makes basketball coaches drool and the athleticism and raw ability which give a high-upside as a prospect...Although we only got a quick look, another guy who arrived was rising 8th Grader Javon Taylor, an impressive young front-court prospect who is following the trail blazed by his older brothers, Maurice and Jacquil Taylor....Back-court players who stood out on the day were Caleb Green, smooth point guard from New Hampshire, Trayvon London, a talented combo out of Brockton, and long-range sniper Jake Coleman, also of New Hampshire.