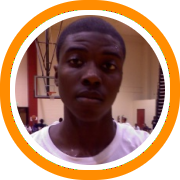 In total the 2011 Scholar Roundball Classic attracted coaches from some of the most prestigious academic schools in the country including Stanford, Yale, Harvard, Davidson, Vanderbilt, Boston College, Brown, Columbia, and numerous others.

The game was back and forth in the first half with both teams looking to get into their early morning rhythm.  Slowly but consistently, Champlain was able to grow their lead and eventually pull away in the second.  Defense was the key as they forced turnovers and contested shots, all while holding Gerald McClease in check.  Nolan Woodward was the standout for the victors, using his strong body and high motor to do the majority of his damage around the rim, while simultaneously proving himself a capable threat at the three-point line.  Vincent Jackson gave TP a similar interior presence with his physicality and athleticism but ultimately Champlain would score their second solid victory of the weekend.

Blair jumped out to an early lead as former Avon Old Farms guard Jihaad Pretlow was providing a spark in his return to New England, but Suffield continued to persevere.  Ben Freeland rose to the challenge of his individual match-up with Blair’s top 100 big man, Mike Tobey, and gave Suffield a major spark in the first half while Colin Pascoe and Erik Sanders led the way on the perimeter to knot the score at 42 heading into halftime.  Jermaine Myers set the tone for Blair to start the second, creating shots for his teammates and being the driving force behind an 8-2 run.  The lead would snowball from there only to see Suffield fight back in the final minutes behind another spurt from Sanders.  Tobey would score a team high 21 for Blair while Joe Hart connected on five three-pointers for 17 points and sophomore Kevin Seymour had 12 of his own.  Sanders led Suffield with 21 while Freeland and Pascoe finished with 18 and 16 respectively.

NMH jumped out to a big early lead and kept their foot on the glass throughout the first half.  Putting points on the board not just in transition but also with a variety of well executed half-court sets, NMH spread the ball around and showed their multitude of weapons.  But true to form, Kent wouldn’t go away without a fight.  They refused to give in and chipped away throughout the rest of the 40 minute game.  Ryan Oliver had his most recent standout game for NMH, scoring a team high 20 points on a series of deep jumpers.  Meanwhile Evan Cummins and Ethan ODay continued to assert themselves on the interior, not only crashing the glass but also making a series of impressive individual moves.  Henry Pendergast stood out for Kent, scoring 18 points by eluding defenders off the dribble while making a series of nice finishes and passes.  Stefon Williams showed some flashes of his vastly improved skill set, going for 14 points on a series of pull-ups and jumpers.  Junior guard Travis Berry also intrigued by virtue of his length and athleticism in the backcourt.

Kimball Union had a strong showing with an up and coming AA team.  Balance was key for the victors as they saw five different players score in double figures, and a sixth score nine points.  Duby Maduegbunam led the way with 17, showing a strong slashing game along with improved three-point range, while the interior tandem of Jesse Chuku and Abdul-Malik Abu both finished with double-doubles.  Devin Gilligan (12), Devin Thomas (10), and Rick Naylor (9) also made timely contributions.  Dimitry Coronel paced Tabor with 21 points, showing his full complement of one on one skills, while Josh Downes (10 points) was at his best in the open floor.

St. Andrew’s jumped on their opponent from the opening tip, pounding the ball inside and taking advantage of some tremendous outside shooting from Tyler Sabino, who went for five first half three-pointers, to take a 14 point lead into halftime.  Choate would come out of the locker room with better defensive intensity and improved decision making to cut a 16 point deficit to 2 with a few minutes remaining, but St. Andrew’s would have an answer, making big shots and icing the game at the stripe.  John Papale scored a team high 18 points on six threes while Casey Woodring and Pete Weston were also beneficiaries of Shane McLaughlin’s penetration.  Cedric Kuakumensah was a dominant interior presence with 13 points and 15 rebounds while Henry Bolton ran the show with a steady hand and Tom Garrick chipped in with 12 points.

In what can only be considered a major upset, Pingree pulled off a dramatic win over class AA Brimmer & May in the nightcap of the 2011 Scholar Roundball Classic.  Discipline and unselfishness were the keys from Pingree as they put on a passing clinic, moving the ball through Brimmer’s full court pressure and half-court zone.   John Spears provided energy and playmaking in the Pingree backcourt, weaving through pressure with his dribble for 17 points, while Kyle Lentini was equally important on the interior, finishing with 16 points.  Adrian Oliveira had a team high 13 points for Brimmer while K.J. Baptiste finished with 12 after doing most of his damage in the first half.