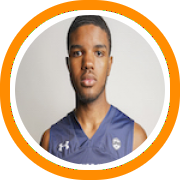 It was last August that the Be Seen Tour rolled into New York to visit the Riverside Hawks, a historic program that was gearing up for a comeback under the leadership of program director Danny Colon.

Not even a year later and that comeback is now undeniable as they are playing in the Under Armour Association for the first time, producing highly competitive teams at all three age levels, and building scholarship caliber talent across multiple classes.

The u17 team has been led by a dynamic three-guard line-up this spring. Jalen Bradberry is in his first year with the club, but was already a known prospect. He’s lived up to his reported recruitment since his arrival but it has been the emergence of Maurice Odom and Todd Rochelle that has provided the team an unexpected spark.

Odom is a rising senior from Union City (NJ) and he’s provided instant offense this season with shifty playmaking and smooth shot-making alike. Rochelle is an ultra-reliable southpaw guard from St. Francis Prep in New York who has been a three-level scorer and is one of three players on the rosters planning to prep at Woodstock Academy next year.

There’s a handful of versatile wings on board in Noah Best, Rich Smith, and Jayshane Woodard, who all provide veteran leadership after returning from last year’s u17 team. Best is arguably the most recruited player in the program as the big and talented wing has been coveted by multiple division I programs for a considerable time now. Smith is a long and rangy big guard type who can play multiple positions while Woodard is a lanky big wing who does his best damage from behind the three-point line.

Both Woodard and Mount Vernon alum Promise Opurum are headed to Woodstock Academy next season for a post-grad year. Opurum is a warrior inside the paint with power, athleticism, and a high-motor alike. He’s joined up front by Nicholas Pavrette, a smooth 6-foot-10 big man who is arguably the team’s best long-term prospect and a player who is bound to break out this July. Ikenna Ude-Smith provides a bouncy and active athlete in the hybrid spot while Daniel Russo is a floor-spacing forward. Mount St. Michael’s Donta Davis is the jack-of-all-trades, capable of plugging virtually any hole in the line-up.

The 16-and-under team may be the program’s deepest with potentially ten-plus players that could potentially contend for scholarships when it is all said and done.

Emile Johnson is a 6-foot-10 big man who will be enrolling at Trinity-Pawling this coming year. He’s still in the early stages of his development, but already making steady strides and possessing clear long-term potential. St. Raymond’s Jireej Cole is a strong-bodied athlete up front while Hotchkiss’ Will Groot is an ideal compliment as a skilled big forward.

Josh Cameron, who is headed to the Hill School next year, is a big wing that was particularly impressive with his aggressive attacking style while NMH’s Will Franks possesses similarly impressive size on the wing, albeit alongside a much different type of floor game with an advanced skill-set. Wyatt Triestman was limited by an ankle injury, but not before he showed off some explosive athleticism and made it clear that he was another prospect to track at Brunswick. Similarly, Salisbury’s Jean-Marc Togodue is a high-level athlete with a powerful body who is going to be able to play and defend multiple positions while simultaneously stretching out his skill-set.

Brandon McCreesh is a scoring guard from the Hotchkiss School who already holds multiple early D1 offers. He is especially dangerous with his pull-up but also more than willing to play both ends of the floor. Paul Ippolito (Williston Northampton), Caleb Crawford (Loomis Chaffee), and Kameran Rodriguez (Berkshire) round out the perimeter rotation alongside Teaneck’s Cameron Estevez. Ippolito is a skilled and ultra-crafty playmaker while Crawford and Rodriguez have more natural burst with their speed and quickness in order to create pace and scoring opportunities for themselves and their teammates.

Even the 15-and-under team had a variety of prospects catch our eye.

Iona Prep’s Bangalay Berete has a long and imposing frame to go with good athleticism, slashing ability, and defensive potential.

Maurice Vassell is a 6-foot-9 big man who changes ends, is light on his feet, and bouncy around both rims.

Jack Bailey is a big and skilled wing who knocked down multiple threes and is headed to Loomis Chaffee next year.

Nichean White is a powerful 6-foot-7 forward who is already impactful and looks like he may still be growing.

Joshua Decady was maybe the best of them all. The 6-foot-6 forward was powerful, getting up to catch lobs, yet still showing some versatility in his attack.

Stay tuned to NERR and our various social media platforms for video footage from the Be Seen Tour's stop with the Riverside Hawks.