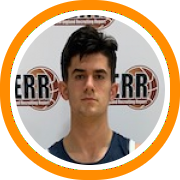 Upstate New York native Nick Benton was big, strong, and very productive on the basketball floor at an early age. That productivity helped him develop an early reputation and college interest before he arrived at the Millbrook School for his NEPSAC debut last fall.

In the eight months since though, Benton has made clear strides. His game has matured while his body and skills have continued to develop. His recruitment has grown along the way with interest from Air Force, Dartmouth, and several programs in the NE-10.

With the ultimate goal of playing at the scholarship level, ideally in a division I conference like the Patriot League or the MAAC, Benton is now another 2021 prospect attempting to bridge the gap between the exposure his progression has earned and the cancellation of the grassroots season to date.

My name is Nick Benton and I am a grinder. I have improved immensely since the end of the 2019-2020 season. Through diligent and hard training, I have increased my vertical jump three inches, increased my speed, as well as my quickness. Each Sunday night I write out weekly goals consisting of improving my body, my skills, and bettering myself as a human being. I believe I will truly turn some heads next time I step on the basketball court.

Off the court, I spend my time working on art, trying to learn new languages, and working a summer landscaping job. All three of these things have taught me the gift of patience, nothing great is built in one day.

"Nick is a tremendous young man and a tremendous worker.  He has transformed his body into a scholarship-level body.  He wants to be coached and he wants to be coached hard.  As Nick continued to adjust to the level of play in the NEPSAC this year, he just kept getting better.  He can score at three levels and he has developed, in himself, a willingness to do the little things - box out, rebound, set screens, run the floor hard.  I am confident that Nick will do these same things at the next level, and that should be a scholarship level."
- Billy Thom, Head Coach, Millbrook School

Benton was physically ahead of his peers at an early age, and while that is often perceived as an advantage early on in the process, it is actually typically the opposite in the long-run as others begin to close the gap physically. To his credit though, Benton is proving to be the exception to the rule because he's continued to take both his game and his body to new levels. The maturity of his approach and commitment to personal development is far beyond his years, according to all reports. On the floor, his physical strength remains an asset, while the progression of his overall versatility has made him a true mismatch problem. He has a very good pull-up game and can score over top of smaller defenders with short pull-ups or by taking them into the post. Conversely, he can also knock down an open three or straight-line drive less mobile defenders. His overall understanding of the game seems to also have really developed within the last year.