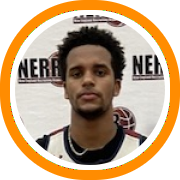 This was going to be a big year for Anthony Clayton as he was going to have the opportunity to play, and prove himself, against the best competition possible, both in the prep and grassroots ranks.

It began in the NEPSAC, where he transferred into Avon Old Farms to run Matt Mihalich's team.

This spring and summer, Clayton's long tenure with the City Rocks program was going to culminate with a spot on the roster of their EYBL team. Of course, that part never happened when Nike cancelled their league due to the coronavirus.

The ultimate goal was to see just how high he could push his recruitment, with current interest ranging from the NESCAC to the Patriot League.

I am a 6’0 point guard who is a great leader and very coachable. I can get my team into its offense, while not be sped up but also know when to take my man off the dribble and attack and create shots for myself or teammates. This past season I shot the ball at a 40% clip from the three. Being able to attack the lane and shoot from the three makes me very versatile and hard to guard. Throughout this quarantine period I have been putting in a lot of work mentally and physically. I have studied up on my previous game film and seen what I need to improve and get better at. I have also been working on increasing my strength, speed, and explosiveness. I have also been in the gym working on keeping my handle tight, making sure I’m keeping my shot smooth and practicing finishing moves and pull ups game speed. My goal is to make it to the next level and impact whatever team I’m on in a positive direction.

"Anthony Clayton is a prototypical floor general. He can realy push the ball in transition while also able to slow it down and get you into your half-court offense. He is quick off the bounce and also relentless at pressuring the ball full-court. I was looking forward to having him on my EYBL team this year coming off a great year at Avon."
- Jim Hart, Director, New York City Rocks

"Ace is a winner. He will guard the other team's best handler, make shots, and run offense. There are days when he's up, but there are never times when he's down. As a coach, it's great to know I can rely on a guy whose only options are good or great."
- Matt Mihalich, Head Coach, Avon Old Farms

"Clayton was the clear leader for AOF this year, and in more ways than one. Offensively, he was the guy who could dictate tempo, get the team organized, and run the show while also being able to drive and kick to create shots for his teammates and becoming an increasing threat of his own from behind the arc. Defensively, his ability to guard the the length of the floor and pressuring the ball, really allowed Avon to set their defense. Overall, his energy level, mature approach to the game, and overall leadership within the program was clear every time I saw them play. Those are all characteristics that are equally, if not more, valuable at the next level, especially at the point guard position."
- Adam Finkelstein, ESPN & NERR