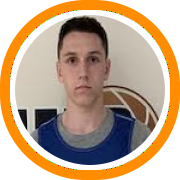 Brett Hutchison's four-year high school career brought him from one of the CIAC's top teams to one of New England's most prestigious post-grad programs and then back again.

He was a celebrated young prospect who came up the ranks with the New York Lightning grassroots program and then cut his teeth against the top talent in New England during two years at Northfield Mount Hermon before returning home to Notre Dame for his senior season.

This year, he stepped right in and became a key piece for a Green Knights squad that went 21-2 and advanced to the SCC finals before the state tournament was cancelled due to the coronavirus.

Now, he'll spend a post-graduate year at the Canterbury School where he hopes to prove himself a scholarship level prospect.

I'm a highly competitive, hardworking play-maker. I am a proven winner who gives everything on both ends of the floor. I will do anything to get the win.

"Brett is rock solid as a point guard/leader. He is able to facilitate efficiently for his teammates while at the same time his ability to shoot a high percentage from the 3 makes him an overall threat and creates great space on the offensive side of the floor for his team."
- Jason Shea, Head Coach, Notre Dame High School

"Words to describe Brett; hard nosed, tough, highly efficient, play maker, defender and winner. Brett has a scholarship level set of ball skills and he can break any defender down off his dribble.  He is exceptional at getting in the paint and making plays. He also can really stick long range 3 point jumpers with confidence. Someone is going to discover Brett, pursue him in their recruitment and get an absolute winner. True to form, Brett had another outstanding year at Notre Dame and is currently exploring a post-graduate year at one of the powerful New England prep schools. Brett's ultimate goal is to compete on the scholarship level."
- Pat Kennedy, former head coach at Florida State, DePaul, & Iona

Hutchison is a gritty and skilled guard who is battle-tested and proven against high-levels of competition. He shoots the ball well from behind the three-point line, provides constant floor spacing, and can both initiate offense and get into the lane with the ball in his hands. What he may lack in sheer size, he compensates for with toughness and intangibles. He's naturally competitive with a productive type of chip on his shoulder that resonates his play on both ends of the floor. He's also won at absolutely every level he's been at as he won NEPSAC championships in both years at NMH and was a part of one of the CIAC's top teams this year at Notre Dame.