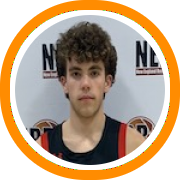 Our post-summer rankings roll-out brings us to the state of Rhode Island today.

Newly arrived prep products are not yet eligible for these rankings, until we've had a chance to evaluate them all, and so this list is currently comprised of those prospects returning to the region OR who we saw as part of the Be Seen Tour last spring or summer.

There isn't much competition at the top of the class as Preston Murphy Jr. is back at St. Andrew's and now 100% healthy after missing the grassroots season with a wrist injury.

He'll be be joined in the Saints' backcourt by incoming post-grad Sean Fullerton, who was one of the breakout performers at the Super 16 Showcase in May.

Top returning prospects include the St. George's duo of Jake Bender and Miles Fiore along with Classical's Marquise Buchanan, Wheeler's Travis Cobain, and Rocky Hill's Denzel Correia along with others.