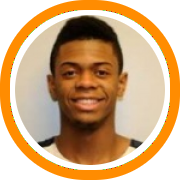 The annual RBC Sports Summer Challenge hosted many of the MIAA’s top teams in the northern region of the state.  Action got underway on Friday at Coolidge Middle School in Reading and continued through the weekend until a champion was finally crowned on Sunday.

The first semifinal game saw Central explode for a 100-77 win over Manchester Essex.  Central would get off to a slow start and find themselves behind 28-22 but eventually imposed their athletic to pull ahead in this shoot-out.

The second semifinal was a back and force contest that saw numerous lead changes until North Andover finally took a 70-63 decision over St. John’s prep with some pressure defense.

The final game was Central Catholic vs. North Andover.  The first half was highly competitive with Central taking a five point lead into halftime.  It was all Central in the second though as they used their physical talents to out-muscle the Knights on the glass and going for loose balls en route to a 72-49 win.

Luis Puello (6’0 Sr. Guard Central Catholic )- This young man simply does it all in every game he plays.  He defends every defensive possession, with his quickness and toughness.  Not one player was able to get by him with the dribble.  He can make the 3, but what is most impressive is that he rebounds like he is 6’8.

Doug Gemmell (6’5 Jr. Forward Central Catholic)- Big, strong young man that can run the floor and hurt you with his inside out game.  He can post you up or take you out beyond the arc and shoot the 3 ball.  He is very aggressive and in the High School game he is a tough matchup for anyone.

Tyler Nelson (6’0 So. Guard Central Catholic)-  If Tyler is open, the ball is going in the hoop.  He has grown 5 inches over the last 6 months which has helped his game drastically.  Central used him at the point this weekend and he did a great job at being a pass first point man and setting up his teammates with some nice passes.

Zach Karalis (6’3 Sr. Guard North Andover)- Zach can play the game.  He plays with great energy and enthusiasm.  He can shoot the ball and get to the rack.  He is also a very good on the ball and help defender.  He will make some lucky college coach happy, but for now Coach McVeigh will get to have all the fun with Zack on his team.

Isiah Nelson (6’6 Jr. Forward North Andover)- Had a huge game vs St. Johns Prep in the Final Four round with 6 three pointers.  He has a nice inside out game that makes him a tough matchup at the High School Level.  He runs the floor well and plays the game hard.

Colby Smith (6’0 Sr. Guard North Andover)- Very good point guard that plays the game hard at all times.  He really gets after it on the defensive end.  He is always on the floor for loose balls and he rebounds well for a point guard.  Love his ability to get the ball up the floor fast and with a purpose every possession.

Steve Haladyna (6’5 Sr, Guard St. Johns)-  This guy does it all.  He has unbelievable hands and rebounds like a 6’10 big man.  He can finish in the lane and stroke the three.  What is most obvious is that he has a passion for the game and plays every possession as if it was his last.

Fred Shove (6’5 Sr. Guard St. Johns)-  This lefty can shoot the 3 and drive to the hoop.  Very physical and plays much bigger than 6’5.  His ability to rebound and defend was impressive.  Love his intensity.

Owen Marchetti (6’4 Sr. Guard St. Johns)-  Another energy guy that can shoot the 3 ball.  Really gets out on the wing and runs the floor well.  Made some nice passes to a cutting Haladyna all tournament long.

Kevin LaFrancis (6’6 Sr. Forward Acton)-  Very good post moves and touch around the basket.  He really runs the floor well and finishes well in the lane.  Understands the game because when he got double teamed he found the open man everytime.

Joe Flannery (6’4 Sr. Guard Acton)-  This young man can flat out shoot the ball.  He is a tough physical player that gets after it on both ends of the floor.  He moves the ball well and his best attribute is his ability to defend on and off the ball

Sean Nally (5’11 Sr. Guard Manchester Essex)- Played exceptionally well all weekend long against some much tougher competition he will face in the Cape Ann League and he proved belonged.  He ability to get to the basket a hit open teammates when the defense tells him to is impressive.  He has a motor that doesn’t stop.

Chris Bishop (6’1 Sr. Guard Manchester Essex)- Shot the lights out all weekend.  In pool play he had seven 3 pointers in back to back games.  He defended every teams best player and rebound the ball on both ends well.  He plays the game hard with great intensity.

John Dillon (6’4 Sr. Forward Belmont)- Very good athlete that can get to the basket and finish in the lane.  Has great leaping ability and plays the game very intense and with a passion.  Showed a great touch around the basket.

Sam Musler (6’2 Sr. Guard Belmont)- Did a great job at the point.  Made some great passes and made some great shots in the lane.  Plays very hard and does a great job of breaking down his defender and finding open teammates for layups

Tim Jiutt (6’2 Sr. Guard Ashland)- This young man was the surprise of the tournament.  He has a very good skill set and is a very good shooter.  He rebounds the ball well and is not scared to mix it up.  Look for him to make some noise this year for Ashland.

Rodney Morton (Malden)  Very athletic and gets out on break and creates havoc for defenses as he is so quick he can get to the basket, but also is a deadly shooter.  Rebounds the ball well and plays hard.

Nick Cambio (6’5 So. Guard Central Catholic)- Very impressed with this young man’s skill set.  He is very athletic and can shoot the three ball and finish in traffic. He was a monster on the glass with many highlight reel put backs. He has a great feel for the game.

Taylor Ketchum, (6’4 Jr. Guard Manchester Essex)-  Played big all weekend long and rebounded the basketball with intensity.  His ability to play shoot the 3 and get to the rim was very nice to watch.

Shane Pasquantonio (6’6 Jr. Forward Ashland)- Had some nice inside moves to go along with his huge jumping ability.  Had a few dunks in traffic and is not afraid to mix it up in the paint.  Has a nice tough around the hoop