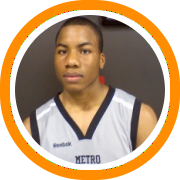 When Tom Moore was the associate head coach at the University of Connecticut he developed a reputation for being one of the best recruiters in the country.

Two years into his job as the head coach at Quinnipiac University and it is clear that not much has changed.

Moore’s Bobcats landed their second commitment in the 2010 class on Monday night when Ike Azotam decided to pull the trigger.  Azotam joins Dominique Langston, who committed late last month, in what is already shaping up to be another tremendous recruiting class for Quinnipiac.

Azotam visited the Quinnipiac campus officially this past weekend and came away too impressed to pass up the opportunity to join the Bobcat program.

“I visited from Thursday to Saturday” Azotam told the New England Recruiting Report, “I thought about it for a couple of days and then made my decision.”

“It was a good fit both academically and athletically,” he said.  “I’ll be able to play for all four years, I love the facility, the coaches are real good people, and I really liked the guys on the team.”

Azotam is a six-foot-seven big man currently doing a post-graduate season at Marianapolis Prep after graduating from the O’Bryant School of Math & Sciences in Boston last ear.

He has starred with Metro Boston on the AAU circuit in recent years and was especially impressive this summer, earning All-Star appearances at the Hoop Group Elite Camp and New England Elite 75 Showcase and then anchoring Metro Boston’s interior at the Hoop Hall National Invitational, Super 16 Showcase, and AAU Super Showcase and Nationals.

"I really want to thank everyone at Marianapolis and especially [Metro Boston coaches] Oscar and Mo [Vasquez] for everthing they've done for me," Azotam said.

With his size, strength, and athleticism Azotam is already an imposing physical presence inside the paint, capable of dominating the interior with his ability to rebound, block shots, and dunk in traffic.

But what’s even more impressive than what Azotam is right now is what he could become down the road.  One thing most people don’t realize about the star forward is that his physical dominance has come without ever having consistently weight trained.  He’s also a player who is just beginning to develop his skill set, showing a face-up game for the first time this summer.  Azotam is already a guy expected to come in and make an immediate impact for the Bobcats, but once he gets into the weight room on a consistent basis and works to further develop his skill set, he could end up having a very successful career in the NEC.

For Quinnipiac, this is just the latest in a long line of impressive recruiting victories.  The Bobcats first commitment of the year came from Dominique Langston, another New England product who was getting a variety of recruitment from higher levels.

This comes on the heels of last year’s class, widely ranked as the best in the NEC, featuring St. Mark’s point guard Dave Johnson, St. Anthony’s power forward and Rhode Island native Jamee Jackson, and Trinity Catholic forward Tevin Baskin, who is expected to be eligible for the second semester this year.