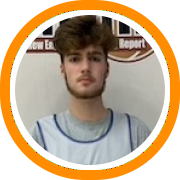 At Bridgton Academy, this was shaping up to be the best team the Wolverines have produced in recent years, before their top incoming prospect, Dom Barlow, signed a professional contract with Overtime Elite. Still though, Whit Lesure has some under-the-radar weapons who could be poised to make some noise this season.

The two most notable prospects on the current roster are a pair of forwards – Trace Salton and Alex Barnhill. Salton is a versatile 6-foot-6 forward from Lake Oswego in Oregon. He was both multi-dimensional as well as probably the most impactful overall player the day we watched the Wolverines. Barnhell, a lanky six-foot-six wing from the Albany area, maybe their best long-term prospect. He’s a high-level athlete who makes some “wow” plays in the open floor and has clear untapped potential on both ends of the floor.

2. Willey Ready to Prove Himself

The most pleasant surprise was Evan Willey. A graduate of the local high school, Lake Region, Willey made the move just a couple miles down the road for his post-grad year and should benefit because of it. He’s not only skilled and athletic enough to hold his own, but very smart. He and Salton are perhaps the most reliable contributors on the team thus far and that should be enough to take his recruitment to the scholarship level.

3. Don’t Be Fooled by Size in the Backcourt

Mateo Esmeraldo and Amadou Diallo are likely to share the point guard duties. While neither sub-six-footer is going to jump right out at first glance, they are very solid with complimenting styles. Esmeraldo is an efficient and reliable true point guard who just makes the right play while Diallo is a diminutive playmaker with an exciting style who can get into the lane and make things happen.

The Wolverines are still waiting on one player to arrive and that’s Solomon Ominu, a 6-foot-10 big man from Nigeria who is already committed to Washington State in the Pac-12. Exactly when he arrives isn’t the only question. It also remains to be seen what he will be able to contribute right away. While all indications are that he should be the team’s best long-term prospect, adjusting to the speed, physicality, and nuances of the prep game is rarely a seamless transition. Melvin Kolenovic, the team’s only returning player, will hold things down in the middle until his arrival.

Bridgton will need more offensive firepower to contend with the best of New England. Exactly who emerges remains to be seen. Kolenovic can bang, rebound, and score around the rim. Ayme Daguilh, a junkyard dog style forward from the Worcester area, is a candidate to play serious minutes. Myles Williams and Michael Wolf are two guards that will be counted on in the backcourt.

3. Do they shoot it well enough?

It has been a long time since Bridgton has had the sheer resources to bring in the level of talent comparable to some of the best in New England. That doesn’t mean they haven’t been able to compete though. The recipe for overachieving always includes toughness and continuity…but shooting is often a big part of that as well. Lots of people are capable of knocking down shots but Esmeraldo and Nate Brinkman are potentially the purest marksmen on the roster.