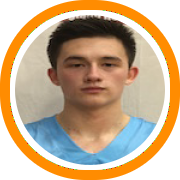 The New England Playaz were the big champions at the Big Apple Summer Showcase, taking the platinum championship with a win over another top Adidas Gauntlet program - K-Low Elite from Philadelphia.

For the Playaz, the entire tournament was a testament to their depth as they played without Davidson bound point guard Kellan Grady and rising junior Nate Laszewski, both of whom were nursing ankle injuries.

Those absences only created other opportunities for others to step-up and step-up they did. Kai Toews and Chuck Hannah, a pair of 2018's from Northfield Mount Hermon were models of efficiency. Toews' decision making, feel for the game and passing abilities were on full display all tournament long while Hannah's emergence continued fresh of his recent St. Joseph's offer as his toughness and productivity continued to be unmatched.

With head coach John Carroll even away from the team until the final, Jerome Desrosiers showed his leadership and emerged as a coach-on-the-floor type during the Playaz run to the final, while Shyheim Hicks' ability to make shots in bunches was critical in a number of moments, most especially the semi-final win over the New York Rens.

The frontcourt tandem of Darnell Brodie and Matt Dewolf both provided consistent contributions while the performance of Ethan Wright in the backcourt was one of the big themes of the event. A highly skilled guard with toughness and I.Q. to match, Wright is still only just 16 years old but proved his ability to exceed guys two years older as he made a series of high-level translatable plays throughout the event. He earned an offer from Colgate on Thursday and was also followed by Davidson and others.

The K-Low Elite squad that the Playaz out-lasted in the final, was tremendously talented and equally impressive. Koby Thomas is a highly athletic wing who is now a mid-major priority but is bound to get some higher level looks in the last week of the live period as too will junior big man Seth Pinkney, who emerged with his shot-blocking and quick finishing. Daeqwon Plowden, Izaiah Brockington and Anthony Ochefu all had a steady dose of division I suitors as too did juniors Damon Wall and Christian Ray.

K-Low Elite defeated the New York Jayhawks in the semifinal but C.J. Kelly was nonetheless one of the biggest break-out performers of the event. The local Queens product was at his best in both the quarterfinals and semifinals, putting the team on his back down the stretch in the Elite 8 and following that up with 19 first half points in the final four. Chris Coalman and Jaheam Cornwall make a "big three" of sorts for this club as all three were heavily recruited as soon as they walked in the door.

The fourth semi-finalist, the New York Rens, had a phenominal week with their 2018's playing up a class. Khalif Battle, a 6-foot-4 guard in the class of 2019 showed star potential and shot-making while landing his first D1 offer from Iona in the process while Sloan Seymour, Christian Hinckson, Malik Martin and Chris Childs all stood out at various times as well.