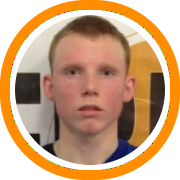 A graduate of Lexington High School in the MIAA, O’Neil is also a product of the Middlesex Magic and one of the most improved players in the program according to program director Michael Crotty Jr.

“Hugh has made more strides in the last year and a half than almost any player I have ever coached,” Crotty said. “He was determined to play basketball at a high academic school, so he took a post-graduate year at Exeter and worked relentlessly all spring and summer to develop his game.”

Even within the last six months, O’Neil’s added versatility is immediately evident. Last spring, when the AAU season tipped, he was primarily an interior player for the Middlesex Magic, but his game had clearly extended away from the basket by the time the Hoop Mountain All-Academic Camp rolled around in July.

By the time he arrived at Exeter this fall, O’Neil was shooting the ball well beyond the arc and even attacking close-outs off the dribble.

“He’s a terrific shooter,” Crotty said. “He can face-up and drive the ball, take smaller defenders to the block, and so he’s a very difficult match-up.”

At Exeter, O’Neil will likely step right in and become one of the team’s top forwards as they look to defend their back-to-back Class AA championships.

“I firmly believe that Hugh is just starting to scratch the surface of what he can be as a player,” Crotty said. “With his best basketball certainly ahead of him, I believe he has a chance to be a great two-way player in the NESCAC and we are thrilled he will enter the Bowdoin Class of 2019.”