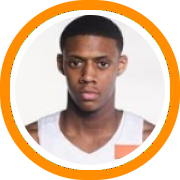 Ohio St. commit Alonzo Gaffney of @BrewsterHoops with the game-tying 3 to tie it up with 2.1 seconds #NPS pic.twitter.com/tLKtEDKdyP

at the @NERRHoops
National Prep Showcase...

Mt Zion Prep Overtime game winner sinks undefeated Brewster Academy. But did he get it off in time?! pic.twitter.com/k9bZ4vopPK

Chris Ledlum is set to destroy the Ivy League. The Harvard pledge is tough, versatile, athletic & plays as hard as anyone in the 2019 class.

Tyson Etienne has been awesome today. Wichita State has a complete gamer in the 2019 class. Rivals150 guard more scorer than playmaker but can do so at a high rate

.@PSAhoops vs @sunrisehoops 76-74 with 3:11 to go in OT. @sunrisehoops is up. Tyson Etienne @TheTyEtienne1 has been playing out of his mind. Michigan State commit Malik Hall @iammalikhall has shown great moments offensively. @NERRHoops

Game of the day between @PSAhoops & @sunrisehoops. PSA holds on in OT but would ha e to think those are 2 of the top 5 prep teams in the country.

Tyson Etienne is a heck of a coup Wichita State. Kid is in great shape. Tough, hard-nosed guard. Versatile, aggressive & can play on or off ball.

Standing room only at #NPS as Sunrise Christian is facing off against @PSAhoops pic.twitter.com/EhWhRekuFQ

Playing w/ a gash over his right eye that will require a handful of stitches tonight and @PSAhoops down 4pts in OT, Hassan Diarra (@hassan_diarra11) WILLED HIMSELF to score the 9 of his team’s final 13 points and led PSA to a stunning 85-82 comeback win over Sunrise... pic.twitter.com/srWpjbE9gx

Giovanni Santiago has been a breakout performer here at #NPS. Tough point guard who has done a little bit of everything for Hargrave thus far @NERRHoops

Giovanni Santiago (@giova10sf) was exceptional for 40 mins, finishing with 14pts/9reb/7ast in @HargraveHoops 93-85 win over IMG. The Puerto����Rican Pitbull sparked a huge run before the half, knocked down ballsy buckets late & was relentless from beginning-to-end.... pic.twitter.com/NsbHclwKme

Lester Quinones (https://t.co/T5l2RA2Fkt) is known for his ability to shoot, but he can dunk too... pic.twitter.com/ICDilIiZaK

Not hard to see how @FUMAPGbbal’s Caleb Mauldin scored 2,000 points during his high school career. 6’8” big gets to his spot, establishes position and goes to work with efficiency in the post. FUMA up 38-21 on St Thomas More at the half....https://t.co/ZdDusEUgAW pic.twitter.com/CrL808NUC2

A LOT of buzz around this year’s National Prep Showcase!!! This will definitely be one for the books!! Best of luck to everyone this weekend �������� #NPS https://t.co/DLIkqpEBl5

Up and running at the National Prep Showcase #NPS pic.twitter.com/uOCJvZiugu

I've started my high school schedule at the National Prep Showcase in New Haven, Connecticut for the last 9 years. I'm back for another year of prep school ball and snow. pic.twitter.com/yYBxAOrHRJ

he straight VIOLATED the defender @Effort_les ������ It's his birthday too! pic.twitter.com/p4I2aKIfzN

Lester Quinones with the HUGE POSTER on his birthday!!! @Effort_les pic.twitter.com/EP0o7xgqcA

Back on the road for the National Prep Showcase. Will get a look at 2019 Draft Eligible prospects Jalen Lecque and Akon Akok here in New Haven. pic.twitter.com/x38o3ozCQJ

Jair Currie & Co. are prepared to lead @STMChancellors against @FUMAPGbball in the opener of the 2018 @NERRHoops National Prep Showcase at Albertus Magnus in New Haven, CT.

The high school season is here, @coreyevans_10 will be in New Haven this weekend for @NERRHoops National Prep Showcase. Always our unofficial start to winter event coverage @rivals

The calm before the storm. #NPS