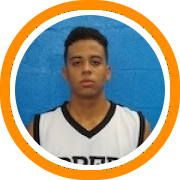 The few best available prospects left in New England continue to come off the board with each passing day and Saturday's it was Tyson Batiste's turn to commit to a division I school.

A Missouri native who found great success this year in New England, emerging into the starting line-up for the Crusaders and helping to lead them back into the National Prep Championship field, Batiste is now set to stay in the region for the next four years.

The six-foot-three combo-guard is the ultimate glue guy in the backcourt. He's very versatile, equally comfortable on and off the ball, able to make open shots and facilitate for those around him as well.

He's perhaps most valuable playing next to an undersized scoring guard, ala Notre Dame's Caleb Smith, because while Batiste is content to play off the ball he brings that point guard mentality and ball-moving ability to the floor, which allows the scoring guard to be aggressive looking for their own offense.

Batiste saw wide-ranging division I interest from schools in the MAAC, Patriot League and America East before committing to the Blue Devils.