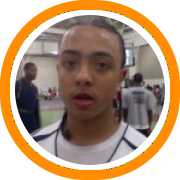 The New England Recruiting Report was in Providence from Friday’s first game until the last ball stopped bouncing on Sunday afternoon.  In that time we got the opportunity to check out quite a few teams.  In fact, for the better part of Friday and Saturday our primary focus was to see some of the local teams we hadn’t gotten a chance to watch yet during this AAU season.  Here’s a look at some of the guys who impressed during that time:

Allen Harris, Catholic Memorial – He’s set to prep next year at Suffield and join the class of 2010 and he had his fair share of division II followers this weekend, all of them admiring his natural scoring ability

P.J. Santavenere, Connecticut Select – He was a spark plug off the bench for Select in their bracket play game as he chipped in with ten points including two three-pointers and one rim rattling dunk.

Jasmin Handanovic, New Hampshire Falcons – A tough kid who said he hopes to prep at Notre Dame.  He ran the team with composure, showed a nice shooting stroke, and got into the lane going to both directions.

George Tsourgransis, New Hampshire Falcons – Another guy who is hoping to head to prep school for another year of development; Tsougranis plays much bigger than his 6’3” frame inside the lane as he is an absolute beast on the glass.

Mike Accaoui, Boston Warriors Blue – He’s clearly become much more comfortable playing the point as he looked very poised running the team…and of course he’s a threat to knock down shots virtually as soon as he crosses half court.

Andrew Victoria, Connecticut Basketball Academy – Without Brandon Sherod in the line-up, Victoria was relied upon to anchor the interior and he didn’t disappoint as he battled inside, came up with a ton of rebounds, and found ways to score around the rim.

Marquis Berry, Worcester Frontcourt Fire – We saw the silky smooth scorer put a big number on the board in the first game of the night on Friday.  He’s especially good in the open floor where he has terrific grace and body control getting to the rim and finishing.

Rodney Beldo, M.A.D. Basketball Club – He’s one of the hardest guys to find on the AAU circuit but we caught up to him on Friday night.  The point guard is very good with the ball and is also a tremendous passer with good vision.

Evan Kelly, Connecticut Elite – Perhaps the biggest surprise performer of Friday night, Kelly has got great size and length for the backcourt to go along with solid ball skills including a very soft and high arching three-point stroke

Brian Grossman, Metro Boston – Gotten a ton better in the last year as he looks to have added about 15 pounds of muscle, has lost the hitch that used to be located at the top of his shot, and can play the point now as well

Jordan Rezendes, Rhode Island Breakers – The junior guard from Wareham (MA) caught our eye early Sunday morning when he knocked down six three-pointers including one that tied the game with just five seconds to play

Derek Retos, Boston Warriors North – One of New England’s top marksmen was showing his all around game when we watched as he was working hard to pressure the ball defensively, draining threes in transition, and scoring in the lane with a soft runner

Jasper Grassa, Boston Warriors North – Provided a huge spark off the bench for the Warriors as he’s a crafty guard with a powerful frame who can be productive with his shot or dribble

Kyle Callanan, Albany City Rocks – The Vermont product is entrusted to run the show for a very talented City Rocks team and he does a nice job of controlling the tempo of the game and getting his scorers the ball in their sweet spots.

Jose Cruz, CMAC Hawks – He’s got good size for the interior but what sets him apart from the pack is his tremendous athleticism which provided us with one of Friday night’s best highlight dunks

Deshawn Murphy, Connecticut Select – Even with stars like Danny Lawhorn and Josh Tuner on the floor, Murphy was his team’s most productive player once bracket play rolled around as he scored inside and out (four threes).

Andrew Douby, Greater Boston Lions – He was a defensive playmaker when we watched as his high motor and activity level forced the opposition into turnovers and consequently allowed him to show his athleticism in the open floor.

Oscar Assie, Connecticut Elite – An absolute physical specimen inside who showed some tools with his back to the basket including good footwork, a couple of nice moves, and one very nice pass

Tyler McFarland, MB Nation – He’s obviously spent a good deal of time working on his body in the last 8 months and he’s beginning to realize the benefits as he has the strength to score inside against bigger and stronger defenders.

The New Jersey Celtics went on to win the 17u Gold Bracket by defeating Boo Williams in the semi-finals and Mass Rivals in the finals.  But their closest contest of the weekend came early in bracket play when they got all they could handle from the Bay State Magic before ultimately holding on for a three point win.  The Celtics featured Kyrie Irving who is one of the top 50 ranked juniors in the country as well as Michael Gilchrist, who is the consensus top ranked sophomore in the nation.