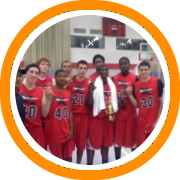 The Connecticut Basketball Club and Xpressions Elite met for the second consecutive year in the finals of the seventeen-and-under bracket, as both teams were able to survive a deep and talented field to duplicate last year’s run.

While the championship game was extremely well played on both ends, coming down to the very final possessions, the match-up wasn’t quite what many expected as neither Andre Drummond or Khem Birch were in uniform as they were two of several players forced to leave early to return to their respective prep schools in time for check-in.

However, that only gave other players an opportunity to step up and that’s exactly what happened for CBC as their win came as a result of a balanced and unselfish attack.  Freddie Wilson led the way with 21 points as he got himself into a good offensively rhythm in the second half.  Brandon Sherrod and Phil Gaetano scored 17 and 14 respectively but both contributed so much more beyond their scoring as Sherrod dominated the glass and Gaetano ran the show from the point.  Tavon Allen, Dennis Levene, and Kris Dunn also stepped up for CBC while Dunn showed some undeniable signs of stardom.

Denzel Brito led the way for Xpressiosn with 17 points as the Lawrence Academy senior put the finishing touches on a series of strong performances this weekend.  Jules Tavares showed flashes while scoring his 10 points while Ricardo Ledo and Ishmael Kalilou finished with 9 each.

It was a one possession lead with two minutes left in the game, but CBC’s clock management was impeccable down the stretch as they were gradually able to pull away in the final moments.

Xpressions Elite earned some retribution in the sixteen-and-under division as they defeated a Riverside Hawks team for the Northeast Hoops Festival Championship.  Akosa Maduegbunam played a big role in the final win as the athletic swingman actually showed some evolving point guard skills, handling the ball and facilitating the offense.

While Maduegbunam was undoubtedly the team’s top player in the final, various players had stepped up throughout the weekend.  Rodell Wigginton showed a good motor all weekend long, and when he’s playing hard he’s right up there with the best the region has to offer in 2012.  That was immediately apparent as Wigginton made some big time plays including one of the most explosive dunks of the weekend.

Tarik Smith and Harrison Taggart impressed as well, as Smith made some tough shots and has obviously been working hard in the weight room while Taggart has developed a terrific apprehension for the game, making a variety of crafty moves off the dribble including a lefty scoop shot and a reverse pivot pull-up jumper.

Terry Tarpey continued to be the local bright spot for Riverside as the sophomore came away from this weekend as a newly identified prospect.

Xpressions Takes Second Chip in u15

After advancing to the finals in the u17, u16, and u15 brackets, Xpressions didn’t fail to bring home a good share of the hardware as the 15’s defeated a talented and well coached CBC/CBA team 69-65 in a very competitive final.

Ramone Gibbons was the offensive story for Xpressions throughout the weekend as he scored the ball in high volume from the first game to the last and all stops in between.  But in the final Gibbons went head to head with someone who had a similar resume as Bernard Brantley had gone for 30 or more points in each of his previous games.  The two young stars went right at each other in Sunday’s final with both players putting big numbers on the board before it was all said and done.

Dimitri Floras was also critical to the championship run for Xpressions while Kaleb Joseph showed plenty of signs of his talent and long term potential.

Stepping up for CBC/CBA was Austin Woods, a 6’4” post player who showed a well groomed interior game.