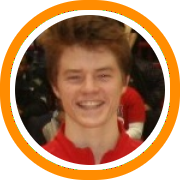 In reality though, Nolan couldn’t have seen much on Tuesday that he hadn’t seen before.

Fairfield Prep is actually located on Fairfield University's campus.  Their basketball team, which has been a powerhouse in the CIAC over the last three years, plays their home games in the university’s Alumni Hall, which is also the home court for the Fairfield women’s basketball program as well as both volleyball teams.

Nolan has been an instrumental part of Fairfield Prep’s success in recent years, landing his first division I offers midway through his junior season and accumulating various levels of recruitment from programs in the MAAC, NEC, and America East Conferences.

Now, he becomes the first player to commit to head coach Sydney Johnson in the class of 2015, although he plans to redshirt his first season at the college level.

The six-foot-three shooting guard isn’t just a high level three-point shooter, but he is also a tough and heady player who should be an ideal complimentary piece at the next level.

Nolan joins Terry Tarpey (William & Mary) and Paschal Chukwu (Providence) to become the third Fairfield Prep product to commit to a division I school in as many years.

Here are some of his junior season highlights care of Next Best Basketball: