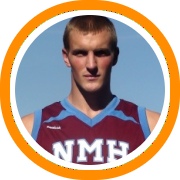 Northfield Mount Hermon has put their 2012 class to bed with the final commitment in their senior class.

“Southern Connecticut got a player in Lucas Van Nes, who is a tireless worker and has his best basketball still in front of him,” NMH head coach John Carroll said.  “He will be a force in the post on the defensive end in the NE-10 and put in the work to help Southern Connecticut get to the top of that league.”

Van Nes is a native of England who has spent the last three years at Northfield Mount Hermon since arriving with his brother and current Fairfield big man, Vince Van Nes, in the fall of 2009.

At Southern Connecticut, Van Nes will provide the Owls with the type of center whose size and physical strength is rarely matched in the NE-10.

More importantly, “He will be a great ambassador for Southern Connecticut State University, just as he has been for NMH,” Carroll said.