NJIT lands a steal in Gray 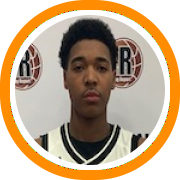 There might not be another player in New England who has improved more in the last year than Mekhi Gray.

The New York native first appeared in the region last fall after transferring into South Kent. He arrived with an early rep and some raw tools, but neither a polished or consistently productive game.

After a year of growth in the NEPSAC, Gray showed increasingly consistent flashes in the EYBL, and especially at the Peach Jam, with his PSA Cardinals squad.

This fall, he transferred to Putnam Science Academy for his final year and is now starting to put all the pieces together. He’s added over 12 pounds of muscle in the last year, evolved into a much more explosive athlete, enhanced his motor, started to increase his shooting ability, and is playing with unprecedented amounts of confidence across the board.

“Mekhi is everything we look for in a PSA kid. He’s a great kid who works hard,” Putnam Science head coach Tom Espinosa told NERR. “His best days are ahead of him for sure. He has a very bright future.”

We now know that future will play out at NJIT after Gray announced his verbal commitment to the Highlanders on Monday, just 48 hours before the Early Signing Period tips off.

His pledge is an undeniable steal for NJIT after he had played his way into offers as high at the Atlantic 10 Conference this fall.

He is also the 8th member of the PSA Cardinals’ 2020 class to accept a full athletic scholarship.