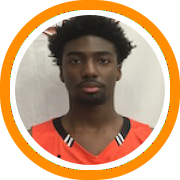 With the fourth and final session of the EYBL regular season taking place last weekend in Virginia, on Friday Nike announced the 24 programs that have qualified for this year's EYBL Finals at the Peach Jam.

Expressions Elite earned an automatic birth with a regular season record of 9-7 will be making their third consecutive appearance at the Peach Jam. They will compete in Pool D where they'll be matched up with CP3, Woodz Elite, City Rocks, New York Renaissance, and Pro Skills. Noah Fernandes led Expressions in scoring and assists this season with 12.9 points and 4.2 assists while Tre Mitchell was the team's leading rebounder with 8.2 boards per night along with 10.1 points.

The City Rocks and Rens both feature local prep products as well. Symir Torrence and Mika Adams-Woods star in the City Rocks backcourt while Tyler Bertram and Nate Tabor are both starters for the Rens while Kareem Reid comes off the bench. The PSA Cardinals also earned an automatic birth, and will compete in Pool C with Maxwell Lorca-Lloyd, Ismael Massoud, James Bouknight, and Richard Springs. The New York Lightning, who feature Cairo McCrory, earned a spot in Pool B.