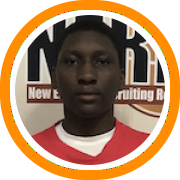 Our updated 2020 rankings move to the state of New Hampshire today where the class is led by a frontcourt trio at the New Hampton School.

Dyondre Dominguez was already among the state's best rising juniors but he now has company with Bas Leyte's decision to reclassify back to 2020 earlier this summer and recent news of Trey Hall's transfer to New Hampton. Together, that trio not only embodies three of the top prospects in the region but also a frontcourt that should be New England's best a year from now, both at New Hampton as well as with Expressions.

Dominguez is an athletic lefty who can knock down threes as well as he can play above the rim. Hall has similar versatility with a strong body and budding inside-out tools. Leyte is more of a traditional big man, but an equally versatile one, as his skill set extends to the perimeter as too does his basketball I.Q.

Proctor Academy and D.C. Blue Devils' Bol Akot is the top guard in the class. A pure point guard who runs the show and creates for others as much as he does himself, Akot also has one of the tightest handles in all of New England.

Kimball Union and Expressions guard Enoch Cheeks rounds out the top five. Cheeks is an athlete with a physical style and improving skill set but what really differentiates him is his toughness and competitiveness. Those are qualities that you really can't teach and tend to be increasingly important with each passing year.

New Hampton and City Rocks point guard Kerem Ozturk has put himself on a clear D1 track in his first season stateside from Turkey while KUA and Expressions big man Tyrone Victor has made steady strides this year and has very clear potential.

The rest of the top ten is comprised of incoming Brewster Academy shot-maker Jaret Griffith, one of the better returning shooters in the class and the Holderness and DC Blue Devils duo of big man Karl Jeannot and wing Carter Storey.