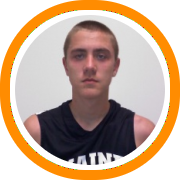 The senior most division at the New England Junior Elite Championships produced numerous noteworthy performances as a number of new prospects announced their place on the scene while some of the usual suspects backed up their reps.

The Mass Rivals and Connecticut Select were both dominant from a team perspective, sweeping their respective pools and setting up a clash on Sunday for the tournament title.

Garet Beal, MB Premiere – Widely considered to be the top freshman in the state of Maine this year, Beal didn’t disappoint on Saturday.  A well built and versatile player who shoots a beautiful ball off the catch or the dribble and is economical going to the basket, Beal stood out virtually every time he took the court.

Mabor Gabriel, Rivals – The Rivals have discovered yet another hidden gem of the long and skilled sort, as Gabriel fits the same mold as many others who have come before him.  His upside is immediately evident with a super long frame and an already honed face-up game.

Daequan Clark, CT Select – The New Britain swingman went nuts in Select’s last game of the day, dropping 34 points on MYCW including five three-pointers and 23 points in the first half.  With a great combination of physical and basketball tools, Clark’s best basketball is still in front of him.

Jonathan Perez, Visionary Basketball Club – A new name emerged today as Perez proved himself to be among the top players in the u15 bracket.  He is a playmaker who gets the ball into the paint at will and shoots the ball equally well from behind the arc with his quick pull-up.

Alijiah Robinson, MYCW – Another guy who came out of nowhere to make a big name for himself, Robinson had friend and foe alike asking ‘who’s that kid’ after MYCW’s final game of the day against Connecticut Select.  He is athletic and incredibly long with a soft touch and balanced game.

Jake Fay & Cornelius Tyson, New England Select – On lone for the weekend, the Fay/Tyson tandem did anything but disappoint in the backcourt.  Fay’s potential stands out more by the week with his size, relative bounce, and shot making prowess, while Tyson’s ability to get into the lane and make plays is something that can’t be taught.

Alec Brennan & Matt Cimino, Rivals – With these two it is less about what they do right now and more about what they could do down the road.  There simply aren’t a lot of young players who can match their combination of size and skill.  Add Gabriel to this duo and the Rivals have an incredible amount of potential in their frontline.

Derek Collins & Dimitri Floras, Rivals – While the Rivals frontcourt is loaded with potential, it was their backcourt that was by far the most productive today.  Collins was getting out in transition and drilling shots per his norm while Floras had the full offensive arsenal rolling, showing his well versed attack to create for himself and others.

Andrew Isaacs & Cane Broome, CT Select – Isaacs continues to be a man among boys in this age bracket as his size and strength is absolutely staggering both off the dribble and inside the paint.  Broome was the ideal compliment with his open floor arsenal of double pump finishes and pull-up jumpers.

•  Adrian Oliveira’s frame is filling out nicely.  He was effective going to the rim and using his length on the defensive end.

•  Like Sam Dowden’s developing size and physical strength, especially as a compliment to a consistent shooting stroke.

•  Adam Ek’s terrific instincts at the point stood out with his bounce passes in screen roll action and crafty spins to get inside the paint.

•  Darrius Edwards’ floor game has become much more versatile as he handles vs. pressure, makes shots, gets to the rim, defends, and even mixes it up on the glass.

•  Matt Costello dropped 19 for MYCW with some floaters inside the lane and a pair of three-balls from behind the arc.

•  Jahvaney Beckford has a wealth of physical ability and potential and puts it to good use inside the paint and in the open floor.

•  Justin Turner showed the ability to both get it to the rim and also make open shots from downtown.

•  Josh Jones is a very good guard who got to the rim and created offense for his teammates.

•  Victor Uldogi was solid in virtually all aspects, doing a little bit of everything on both ends of the floor for his team.

•  Alex Cooper is very good in the post with good size and a soft touch on his shot.

•  Ben Walls is a clutch player who made big shots at key times for his team.