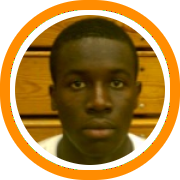 Marianapolis Prep was the class of the “A” division finishing with a perfect 3-0 record on the day.  It appears as if Coach Vitale’s group will once again have one of the deepest team’s in Class B of the NEPSAC as today they still went 10 strong despite missing two special players in Mike Myers-Keitt (shoulder injury) and Mike Rivera.

Aaron Strothers, Nikoal Vukadinovic, and Beyiha Ba Nguindjel were all impressive at various points throughout the day.  Strothers was very active around the hoop on both sides of the floor, Vukadinovic was bombing away from down town as usual, and Ba Nguindjel was a terror on the inside.  But perhaps the most impressive player on the Marianapolis roster today was Corey Wright Jr.  Wright starred at St. Raphael’s Academy last year and is said to be considering a jump to the NEPSAC.  Based on what we saw today that might be a good move as he was terrific running the Marianapolis team.  Wright is a player who rarely gets an opportunity to showcase his natural point guard skills because both his high school and AAU teams require him to put a lot of points on the board to be successful.  But today he did a terrific job of getting everyone involved while still picking his spots to create his own offense.

Another team who appears to be on the verge of a big season is Hartford Public.  Not only is the school one of the favorites in class “M” of the CIAC next year, but they are poised to stay there for years to come with a roster full of talented youngsters.  With underclassmen like 6’8 power forward Darryl McCoy in the class of 2009, 6’2 swingman Lamar Burgess in the class of 2009, and 5’9 point guard Danny Lawhorn in the class of 2010, the Owls have three players to build the future around.  Additionally 5’9 senior point guard Rasheem McCoy provides the leadership that every great team needs.  Today the well balanced squad made a statement with two dominating victories.

Here are some individual performances that also stood out during the day:

Tony Taylor:  The super quick guard led his Arch-Stepinac team (New York) to three solid results.  In every game the opposition found it almost impossible to keep Taylor in front of them.  When it became a little too easy to blow by his man every time Taylor showed his versatility as he knocked down a few shots from behind the arc.

Chris Prescott:  After being named an all-star at Eastern Invitational only a day earlier the sharp-shooting guard picked up right where he left off as he knocked down five consecutive three-pointers to open the day.

Stanford Dulaire:  Another player who is coming off of a solid performance at Eastern Invitational.  He was at his best around the rim today as his quick leaping ability had him finishing at the cup all day long.

Vic Anderson:  The lefty showed an improved skill set as he knocked down open looks from the three-point line and pulled up off the dribble in the mid-range area while still showing the athleticism to throw down some thunderous dunks.

Alex Berthiaume:  No other player in the field could match Berthiaume’s basketball I.Q. and understanding of the game.  He does a terrific job running his team and is also a lights out shooter with deep range.

Tywan Samuels & T.J. McKiver:  If Hillhouse is to complete the three-peat in the state of Connecticut then this duo will have to come up big throughout next season.  They provide a terrific inside-out combination as McKiver is a beast on the block and Samuels is very effective slashing from the perimeter.

Brian Fitzpatrick:  He had a tremendous day and commanded the attention of the division I coaches in the gym.  He was already a major mismatch problem with his ability to shoot the 3 or post up the smaller defender, but if he can create off the dribble on a consistent basis, like he did today, then his recruiting level should raise significantly.

Shawn Holley:  A super athletic combo guard who was at his best attacking the rim.  He was like a one man fast break who was almost impossible to keep out of the paint.

George Jordan:  Managed to lead his Marlboro team to a successful day despite the fact that they were missing two starters.  While he continued to be efficient on the interior he has also developed the ability to face up and create off the dribble, either for himself or others.

Nick Greenbacker:  After being a perimeter oriented team in recent years East Catholic will now have to revolve around their talented big man.  He appears to have developed a solid go-to move with his back to the basket as his lefty jump hook was rarely stopped today.

Justin Wilson:  He made a huge impact for his Windsor team when he arrived for the afternoon session.  The rising senior showed good leadership skills directing his younger teammates while also putting the team on his back when necessary.

Cody Otto, John Karas, Chris Canino, & John Pinone:  Canino and Pinone form as talented of an interior tandem as you’ll find in the CCC.  But early in the day it was Otto and Karas who sparked their team to victory.  Otto was all over the floor on the defensive end while Karas showed a great shooting stroke from the perimeter.

Stefan Holley:  The athletic guard paced his team throughout both of their afternoon games.  He did a nice job attacking the rim off the dribble while also creating turnovers with his defensive pressure on the other side of the court.

Dan Martin:  Despite being somewhat undersized in the post the 6’3 rising sophomore has terrific footwork and a great feel for how to play the game in close proximity to the rim.  He had no problem establishing position and scoring with his back to the basket against defenders that were both bigger and older.

Jeffrey Clemons:  He made several impressive drives to the basket to break the 20 point mark in his team’s final game of the day.  On a team that is very balanced, Clemons managed to stand out with his assertive play on the offensive end of the floor.