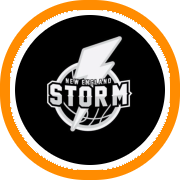 Anthony Chinn 6’3 Shooting Guard 2023 (Pinkerton Academy): Chinn is a multi-faceted scorer. He is a consistent threat from three-point range. Makes treys off movement or when spotting up. Shows in spurts an ability to hit threes on pull-up attempts. Uses a quick crossover move to get by defenders in isolation situations. Chinn finishes around the rim at difficult angles with a soft-touch high off the glass with his left hand. He is a good off-ball cutter. Regularly creates high percentage layup opportunities moving to the open seams in a defense. Also has a post-game. Can back down smaller opponents and score with drop-steps. Defensively, Chinn uses his length and lateral quickness to effectively guard both wing spots. Makes it difficult for opponents to shoot over the top of him while also limiting his matchup from getting by him with straight-line drives.

Tyler Bike 5’11 Point Guard 2024 (Trinity HS): Bike uses good change of pace and a quick crossover move to regularly get into the paint. The southpaw has a smooth mid-range pull-up that he also gets to well when using a ball screen. If a defender stays in front of him on lane penetration, Bike can score over them getting nice separation with a turnaround jumper. His good feel as a passer in the half-court is apparent when opponents help on him. Consistently finds teammates for dump-off/cutting layups. Also rewards teammates for running the floor hard in transition with precise passes leading to high percentage finishes around the rim. Bike needs to be accounted for from long-range. Makes treys at a solid rate on standstill attempts or when pulling up. Defensively, he generates steals well. Rotates quickly from the weak side, picking off passes if an opponent telegraphs where they are going to throw the ball.

Javari Ellison 6’6 Combo Forward 2023 (Bishop Guertin HS): Ellison can space the floor effectively from downtown. The southpaw hits three-pointers at a solid rate when spotting up. Creates high percentage finishing opportunities for himself on the offensive glass with his constant aggression and leaping ability. Ellison also makes quick cuts to the basket for layups when an opponent is overplaying him on the perimeter. He is a good passer. Uses his size to see over the top of defenders and find teammates for cutting finishes. Defensively, Ellison does a nice job using his length to make it difficult for opponents to rise over him.

Matt Lamy 6’4 Wing 2023 (St. Paul’s School): Lamy stretches the floor well from beyond the arc. Has compact form on his shot. Makes treys at a good rate when spotting up. He is more than just a shooter though. When opponents close out hard on Lamy from the perimeter, he can put the ball on the floor to get into the lane. Has a smooth floater and teardrop as part of his in-between game when defenders rotate over on him in the paint. Does a nice job playing within the flow of his team’s offense. Rarely takes ill-advised attempts. Defensively, Lamy has a solid understanding of where to be on his off-ball rotations. Rarely is responsible for an opponent scoring from being out of position.

Jack St. Hilaire 6’1 Shooting Guard 2023 (Windham HS): St. Hilaire is a sniper from long-range who can get hot in a hurry. Has deep range while needing very little time and space to get his attempts off. Makes three-pointers at high volume off movement or on spot-up attempts Also can hit treys when pulling up. Has a good feel moving to open spots against a defense, creating additional looks for himself from beyond the arc. If a defender is hugged up on St. Hilaire to take away his potent outside shot, he makes quick backdoor cuts to the basket for high percentage layup opportunities. Shows in spurts an ability to hit mid-range pull-ups when attacking closeouts.

Sam Andreottola 6’6 Power Forward 2023 (St. Paul’s School): Andreottola cannot be left open from the perimeter. Hits three-pointers at a solid rate on standstill attempts or when popping out from the mid-post. If a defender makes a sharp contest on him to take away his outside shot, he can put the ball on the floor for physical finishes at the rim. Andreottola is a scoring threat in the post. Has a soft jump-hook when backing down opponents on the block. Cuts well from the weak side, creating high percentage layup opportunities for himself when he catches opponents not playing with their head on a swivel. Defensively, Andreottola is solid on the glass. Uses his high motor and strong body to corral important rebounds.

Tyrone Chinn 6’0 Point Guard 2023 (Pinkerton Academy): Chinn uses his quick first step to consistently get into the lane and create for himself or others. When bigger defenders collapse on him in paint, he can score over them with a smooth teardrop. Is a good passer, finding teammates in the half-court for cutting and drop-off layups. Chinn also uses his speed in transition to create high percentage looks for teammates around the rim. Opponents need to respect him as a long-range threat. Makes open spot-up treys at a solid rate when the ball is swung his way on the perimeter. Defensively, Chinn moves his feet well from side to side. Limits opposing point guards from getting by him with straight-line drives.

Savion Stroud 6’2 Shooting Guard 2023 (St. Paul’s School): Stroud is a dependable shooter from deep. Has fluid mechanics on his shot with a quick release. Excels at hitting three-pointers when spotting up. Shows in spurts an ability to make treys on pull-up attempts. Stroud has good vision as a passer in the half-court. Finds others for dump-off layups when attacking closeouts. Also makes precise passes to teammates for cutting finishes around the basket. Defensively, Stroud generates steals at a solid rate. Has quick hands to rip the ball from opponents when they are weak with their handle. Also draws charges well. Rotates quickly from the help-side, beating opponents to the spot when they drive recklessly down the lane.