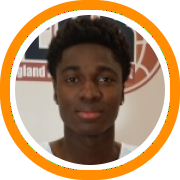 The New England Hoops Festival hosted many of the top AAU programs in the region this weekend. Our first recap from an exciting weekend of action looks back on the varsity division, where a relatively new program made a name for themselves this weekend.

Basketball 2 the Limit, or B2L as they were widely known as this weekend, made their presence felt from start to finish, proving themselves both individually and collectively before the weekend was done.

Most impressive was Guilien Smith, the Central Catholic guard who committed to Dartmouth in August. Smith was a relative unknown beyond local MIAA circles up until that point, but that won't be the case for long. He put on a show this weekend, scoring the ball in high volume from all over the floor and incorporating tough shots and explosive dunks alike in his attack.

On the other side of the bracket, Expressions Elite's 10th grade team played up an age division and still rolled over the competition. Jermaine Samuels was up to his usual tricks while Jordan Hardwick was showing his trademark athleticism around the rim, but this weekend proved to be an opportunity for others to step up. Derrick Ellis was particularly impressive making plays off the dribble for his teammates, while Geo Baker was splashing shots with ease from downtown. Joe Kazperzack was a new name that came to the forefront this weekend as was Tabor Academy big man Akim Sanni. Catholic Memorial sophomore Ulyen Coleman solidified himself as a nice prospect for the future after first making a name for himself at last month's Elite 75 - Frosh/Soph Edition.

The Middlesex Magic also had a great weekend, with a pair of teams both advancing to the semifinal rounds. Nick Seretta continued to be an offensive spark-plug for this club, just as he had been throughout the spring and summer, while Matt DeWolf reminded us why he is a young big man with a bright future. However, the most notable performance of the weekend belonged to Thayer Academy sophomore Jordan Mello-Klein. The lefty guard was doing double duty and impressed from start to finish with a well rounded southpaw floor game.  Brendan Hoban, Harry O'Neil, and Phil Leotsakos all impressed for the various Magic teams this weekend as well.

This weekend also gave us our first look at next year's BABC squad, albeit fairly short-handed this weekend. Bruce Brown and Terrell Brown continued to anchor the perimeter and interior as was expected but Ryan Layman, a six-foot-five swingman from King Phillip High School, looks like a player whose stock could take off in the coming months. Fru Che is an ultra efficient forward and jack of all trades for this club while Brandon Twitty gives them an obvious boost off the bench with his length atop the press and ability to provide instant offense.

Here's a look at some of the other players in the varsity division that impressed this weekend:

Terrel Williams, Boston Bobcats - He scored points throughout the day on Saturday but was simply the talk of the gym on Sunday as this Bridgewater-Raynham guard proved that he could put points on the board against some of the very best competition New England has to offer.

Jack Hartnett & Mike Algeri, Mass Elite - They made a formidable duo to lead the way for Mass Elite. Hartnett is a big wing with a strong body who made tough shots off both the catch and the dribble while Algeri was the egine that made the team go, running the show from the point guard position and attracting attention from college coaches in the process.

Kyle Henseler & Joe Sekator, BABC South - The guards from Rhode Island formed a nice tandem for BABC South. Henseler did a nice job running the point, directing traffic, & keeping his squad organized while Sekator is a high level athlete capable of rising up to make some explosive plays above the rim and still learning to incorporate his physical tools into his attack.

Javon Taylor & David Watkins, Mass Rivals - Watkins was one of the few regulars from the Rivals 11th grade team to be in action this weekend but he had no problem seizing center stage to show the recent developments in his game. Meanwhile, Taylor played up with the 11th graders and continued to show the combination of size, handle, and playmaking ability that has everyone so intrigued with his celiing.

Andy Kaplan & Ryan Noel, Wellesley - The local MIAA squad played together this weekend as a tune-up for the coming high school season and got leadership and production from this senior duo. Noel anchored the team defensively, patrolling the paint and cleaning the glass while Kaplan showed his physical strength, playmaking, and capable shot-making ability on the offensive end.

Brad Landry, CT Hoopstars - The Hoopstars turned in an inspired performance on Saturday afternoon and Landry was one of the main catalysts. His jump shot continued to be his best asset but his overall feel game was impressive as well as he made good decisions with the ball, fed the post, and showed composure against pressure.

Josh Bradamese, New England Storm - A powerful combo-forward who could attack both inside and out, Bradamese was a bright spot for the Storm this weekend showing a dependable jumper and a sneaky bit of handle as well.

Kevin Durkin & Rich Harrington - The seniors continue to be an intriguing frontcourt tandem. Durkin has the type of big shoulders and natural frame that just jump out at you while Harrington continues to tease with his upside thanks to his size, length, and three-point range.