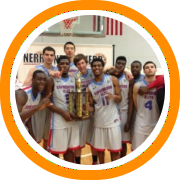 The arrival of bracket play at NEHF 2013 came with an elevated level of competition and talent explosion in Sunday’s round of games, complete with wire-to-wire finishes, on-paper upsets, and a myriad of rise-to-the-occasion individual performances from elite-caliber prospects looking to put their respective stamps on the northeast’s unofficial kick off to this year’s grassroots season.  Here’s a brief capsule of how each final played out as well as players that distinguished themselves with standout performances amongst a who’s who of the region’s premium collection of talent.

The u17 final saw first-year EYBL program Expressions Elite take on an up-tempo CT Select team full of bold athletes looking to culminate their run to the championship with one last favorable outcome against a highly-pedigreed opponent.  Both teams would continue along the trends that saw them run through their respective brackets, with running-mates Abdul-Malik Abu and Jared Terrell finishing in multiple ways at multiple levels for Expressions in the opening minutes and the impressive trio of Donte Gittens, Chan Williams-Bey and Chaise Daniels leading a CT Select attack capable of putting up big numbers in a hurry in explosive fashion.

With CT Select owning a 33-32 lead at halftime in a highly-entertaining opening 16 minutes, Expressions would quickly take control behind the three-point shooting of match-up problem Aaron Falzon and continued work of Abu on the interior.  CT Select would fight to stay within striking distance down the stretch with the shot-making of Shane Christie and Ian Gardner, but the overwhelming combination of Abu’s skill-level and quick bounce around the rim would prove too much to overcome as Expressions would ultimately hang on for a well-earned, 74-62,  victory.

A disciplined and very well coached House of Sports team left little doubt in the championship game, culminating an impressive weekend of work that saw them utilize a deep rotation to wear down countless opponents.

The Spring Valley tandem of Kai Mitchell and Rickey McGill were often at the forefront of the team’s offensive attack.  Mitchell anchored the interior, finishing consistently around the rim all weekend long while also showing a nice touch to 15 feet.

Meanwhile McGill showed a versatile two-way floor game that included a combination of explosive drives and deep jumpers along with an extremely active defensive approach.  Mike DeMello, a junior at White Plains High School, was McGill’s running mate in the backcourt, showing a high basketball I.Q. and well rounded skill set highlight by a knockdown stroke from the three-point line.

Abdul Malik-Abu (Expressions Elite u17)- Abu showed multiple dimensions to his steadily developing offensive arsenal in Sunday’s final against CT Select, knocking down pick-and-pop jumpers in the role of a pro-style stretch four and putting the ball on the floor decisively with his dominant hand for a one-bounce pull-up off the glass over a bellied-up defender.

Jared Terrell (Expressions Elite u17)- Straight line attack was Terrell’s weapon of choice against CT Select on Sunday, as Terrell got into several passing lanes for easy run-outs above the rim in the open floor.  With his jumper now a legitimate weapon, Terrell continues to diversify his attack and add more ways to be effective against single and multiple-coverage looks.

Jared Wilson-Frame (Expressions Elite u17)- Although still new to this club, Wilson-Frame has made a quick adjustment, and seemed to be in very good rhythm all weekend long.  He made a number of timely jumpers through Expressions’ run to Sunday’s championship while providing an ideal complement to the one-two punch of Abu and Terrell.

Dante Gittens (CT Select u17)- Gittens’ stock as a long-term perimeter prospect is easy to defend with his length and creativity with the bounce through traffic, as the six-foot-three Master’s School-product has the athleticism and natural instincts to develop into an impact playmaker for a college program willing to invest the necessary time into his development.

Chan Williams-Bey (CT Select u17)- Relentless competitor and fearless playmaker are two evaluative superlatives that fit Williams-Bey extremely well as demonstrated by his rise-to-the-occasion performance on Sunday.  Bey possesses superb quick-twitch instincts getting out into lanes defensively and changing ends in a hurry to finish above the rim with ease.

Chaise Daniels (CT Select u17)- Daniels showed flashes of what he is capable of becoming in the future as his undeniable tools and talent all came together.  He changed the game on both ends of the floor by scoring points in the paint, changing shots on the defensive end, and even making himself a factor in the open floor.

Sammy Mojica (Rivals u17)- Mojica has officially arrived on the regional scene as a fearless playmaker wired to the score from a variety of angles with a variety of weapons.  Added polish and understanding of how to increase his efficiency headed downhill with the ball will only enhance his intrigue to college programs in need of a simple game-changing element: Offense.

Jalen Adams (Rivals u17)- In one of the most simple, yet impressive, individual sequences of the entire event, Adams rose up for a feathery mid-range jumper off a dizzying front-cross combination, followed by a silky Euro-step in transition in which he pumped the breaks on a dime and elevated to finish with eloquence over length from the first marker.  The six-foot-two combo’s stock continues to rise as the layers of his talent continue to unravel and games continue to be won by his big-moment, big-play DNA.

Kaleb Joseph (Rivals u17)- He was the hero of the Rivals quarterfinal win as he broke a tie in the game’s final seconds by drilling a 14 foot pull-up jumper while isolated for the game winner.  In total, he continued to show the ability to raise the level of his game when it mattered the most.

Paschal Chukwu (CBC u17)- Chukwu’s development physically and from a skill perspective continue to warrant attention from the elite levels of college evaluators as he is steadily emerging into a game-changing factor on both ends with his supreme, rim-protecting length and developing low-post attack.

Rashard Figures (Team Scan u17)- The six-foot-four wing knocked down shots in small bunches off the bench for a front-court laden Scan squad en route to multiple double-digit performances over the weekend. Figures capitalized on specific pin-downs hits run his way in structure and showed highly-valued feel in spacing off dribble penetration for clean looks off second side half-court action.

Cheik Diallo (Team Scan u17)- Fresh off his appearance in Saturday’s Jordan Brand Classic International Game in New York City, the six-foot-nine, trampoline-leaping big’s high-major attributes were on full display on Sunday as a game-changing, paint-owning presence on both ends.  Diallo is a gazelle running to the rim in transition for quick-lift dunks and above-the-box blocks, shows a mature commitment to guarding chest-to-chest and rebounding his side of the floor in the half-court, and even showed emerging footwork as an offensive post option warranting multiple bodies to keep him from dominating single coverage on the interior with a mix of fakes and touch with both hands.

Chris McCullough (Team Scan u17)- Solidified as a true national-level prospect in his 2014 class, the future Syracuse Orange showed signs of a competitive motor on Sunday capable of turning him into the next New England product to emerge as a Green Room priority for pro franchises.  With a considerable degree of skill development still in his long-term blueprint, the six-foot-nine shot-blocking, rim-rocking menace will simply be fun to watch progress over the next several years.

Kerem Kanter (ECE Elite Mass u17)- Kanter was a very strong player down low for ECE Mass on Sunday. Carving out space from a variety of angles, he is adept with both hands and a great finisher around the basket. Also a very strong rebounder on the offensive and defensive glass, his 36-point, 17 rebound (six offensive) performance against a very athletic Connecticut Select team was one of the best performances of the playoffs.

Kyle Howes (Boston Warriors u17)- A tough combo guard who had a pair of strong performances for the Boston Warriors in the playoffs on Sunday, Howes took a game over down the stretch in a first-round playoff matchup CT Select Ballers. He scores in a variety of ways, hitting from both the outside and slashing to the basket with the ability to create his own shot when needed.

Keyma Cannon (Mass Elite u17)- He first caught our eye last May at the Memorial Day Super 16 tournament and backed up that performance with another strong showing this weekend.  The Braintree junior led Mass Elite to a successful 2-1 record on the weekend while also serving as one of the primary catalysts for an upset over New York City’s Team Underrated to cap the day on Sunday.

Isaac Vann (USAD u17)- He showed off a great ability to get to the rim at will, using his length to finish just about everything around the basket.  His jumper was also falling, making him a mismatch in every game that he played thanks to his natural ability to score the basketball.

Kealen Ives (RI Hawks)- His playmaking skills were on full display with his ability to finish plays himself or draw help and find open receivers.  He put a powerful punctuation mark on a close game with RAP Elite on Saturday, capping the victory with a highlight worthy monster slam.

Ben Engvall (RI Hawks)- He went for 18 points, shooting the ball extremely well while making key plays in a variety of important situations.  He finished off rebounds, knocked down open jump shots, and made plays by converting every time he got to the rim.

Jackson Donahue (RI Hawks)- The lights out shooter made his defender pay any time he saw an inch of daylight.  His long distance marksmanship gave the Hawks an emotional lift in a tight game, as he knocked down two huge shots to provide separation down the stretch.

Caleb McKearin (New England Basketball)- A physically imposing big man who runs the floor very well for his size and is a big factor on the defensive end, Mcaron did a good job of rebounding and altering shots all weekend long.