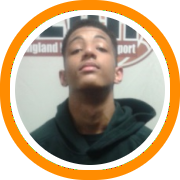 Pool play heated up as games stretched in Saturday evening at Trinity College, with competition reaching a maximum level with bracket seeding for Sunday on the line.  With some of the region’s most prestigious programs beginning to position themselves for elite bracket match-ups fast on the horizon, the following players separated themselves with impact performances for their respective clubs:

Terrell Brown (BABC u16)- The emphasis was on his offensive tools early in the year, but a recent growth spurt compounded by a newfound emphasis to protect the rim now his him on a path of defensive dominance.  Brown’s shot-blocking instincts are as pure as anyone we’ve seen in a BABC uniform since Nerlens Noel, while his offensive production is coming by an inside-out approach these days.

Jared Wilson-Frame (Expressions Elite u17)- One of the more impressive individual performers in the late-afternoon set, the Windsor-native showcased explosive bounce finishing the ball above the rim in transition while mixing in multiple catch-and-shoot jumpers from behind the arc.  A powerful guard who gets off the floor in a hurry to finish over size, Wilson-Frame will undoubtedly create plenty of intrigue for mid- to high-level programs enticed by his ready-now build and natural ability to fill it up from all three levels.

Abdul-Malik Abu (Expression Elite u17)- A tomahawk finish waiting to happen from the full circumference of the charge arc, Abu continues to impress with his sure hands and active feet as a true BCS-level prospect.  With continued emphasis on knocking down shots out to the arc, the sky is the limit for the six-foot-eight hybrid forward in his progression towards becoming a day-one impact player at the college program fortunate to gain his services.

Chris McCullough (Team Scan u17)- Joining Abu as one of the several high major prospects in the building at Trinity as the evening sets unfolded, McCullough’s staggering combination of length and athleticism was in full-effect in Scan’s second win of the day.  As his skill-set continues to approach his natural physical gifts, look for the six-foot-nine forward to define a true offensive approach and become an absolute nightmare to deal with in side post-up or short baseline-isolation settings.

B.J. Martin (BABC u16)- An imposing physical presence at an agile six-foot-six, Martin simply overmatched defenders with his straight-line burst and power heading downhill with the ball in transition.  Showing signs of a smooth stroke from three, Martin projects as a multiple-threat player capable of scoring the ball in bunches from all over the floor.

Jonathan Joseph (BABC u16)- A crafty, creative playmaker whose winning pedigree is well established on the circuit as the primary handler on his BABC squad, Joseph continues to show signs of a consistent three-point stroke to go with his breakdown ability off the bounce.  Connecting on three first-half threes in BABC’s convincing Saturday evening victory, the undersized spark plug will continue to raise his intrigue to college coaches as someone capable of making positive plays at all three levels.

Chase Wilson (Team Insane u17)- Finishing with a team-high 26 points, the six-foot combo guard converted on multiple pull-ups and strong straight-line attacks to lead his club to a crucial pool play victory in Saturday evenings session.

John Roop (Mass Elite u17)- A volume shot-maker at five-foot-ten, Roop showed his prowess from distance with five threes en route to a team-high 17 points.

Mike Rodriguez (BABC u17)- A high-energy, first burst lead guard, Rodriguez made a multitude of plays scoring and sharing the ball in the open floor on Saturday evening, including an above-the-rim finish on the break that had the Oosting Gym crowd on full alert to the prowess of his aerial attack.

Jalen Adams (Mass Rivals u17)- Perhaps no player at the event showcased more natural feel with the ball in his hands as Adams on Saturday evening, whether he was knifing through traffic to drop a nifty dime to a cutting teammate or stopping short of contact to avoid a charge and finish with ease from a difficult angle.  The game simply comes easy to Adams and his level will continue to rise as his work ethic and ability to score the ball from the perimeter rise to parallel his supreme natural gifts.

Alec Brennan (Expressions u17)-  The high-IQ, volume rebounding, highly-skilled hybrid four impressed with his will to run rim-to-rim in transition for bouncy finishes above the rim, while owning his area in the half-court on both ends rebounding and scoring the ball with steady production.  Another budding Rivals big with a stock on the rise, Brennan’s toughness and ability to stretch his game out somewhere close to the three-point line will dictate his success as true match-up problem at the next level.

Bonzie Colson (BABC u17)- With his stock rapidly rising, Colson was a proverbial man among boys on Saturday evening, rebounding in and out of his area on both ends and scoring the ball at the rim with a carve-out gather step through contact.

Kaleb Joseph (Mass Rivals u17)- Fresh off leading Cushing to a NEPSAC AA title in March, Joseph continues to be the catalyst for his up-tempo Rivals squad, pushing the ball with pace and poise and showing the flashes of creativity that allow him to separate and finish at will against most the region has to offer in the form of one-on-one defensive covers.

To view the updated schedule for Sunday please click here.