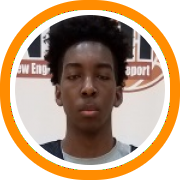 The first ever New England's Finest Showcase was Sunday night at the XLSportsworld in Saco, Maine. Prospects from the 2017-2020 class in Maine showcased their talent to college and prep school coaches alike.  Players participated in drills, stations and games, displaying their abilities in a variety of settings.

Here are some of the top prospects from the showcase who impressed college coaches and spectators in attendance:

Noah West, Hyde Prep 2017- West was the standout of the showcase. He is a quick explosive guard with a tight handle who can rise up and finish above the rim. His floor game was impressive as he blew by defenders and found the open man cutting in for layups.

Noah West 6'1" 2017 of Hyde (ME) was making plays like this all day. He is a great playmaker and has some freakish athleticism. pic.twitter.com/NOxAxQR4HO

Miguel Prieto, Hyde Prep 2017- A floor general who makes terrific decisions with (and without) the ball in his hands, Prieto can push the tempo and attack the defense all while staying under control.

Clay Hardy, Portland 2017- Hardy stood out in one on one drills with his attacking mentality and athleticism. When 3 on 3 and full court games started, he showed the ability to score from all 3 ranges.

Jake Carrier, Manchester Memorial 2017- Long lefty who caught college coaches' attention with his deep range that stretched defenses out to go along with his impressive motor and IQ.

Mason Cooper, Lawrence HS 2017- A knockdown shooter who can score from deep put also has the versatility to put it on the floor and and hit the midrange jumper. Potential three-range threat.

Cameron Holmes, Gorham 2017- A 6'3 knockdown shooter who was hitting from all over the floor and is going to be even more valuable at the next level when spacing comes at a premium.

Yai Deng Waynefleet, 2017- A 6'5 long prospect who moves his feet extremely well on the defensive end and can put the ball on the floor. Deng seems to be someone who will develop in college and be a solid contributor at that level.

Nate Benoit Brunswick 2017- Another knockdown shooter who flourishes in the catch and shoot game, Benoit is virtually automatic with his feet set and can make shots off the catch or the dribble.

Evan Christiansen, Thornton Academy 2017-  Evan is a tough competitor who uses his strong frame to get in the lane and finish through contact. A very active rebounder on both ends, Christiansen is that piece of a puzzle every coach needs.

Jordan Bagshaw, Greely 2017- Bagshaw, who stands at 6'0, is a talented guard with a great floor game. He finds the open man on cuts and is a great off-ball cutter himself. He can also score from all three ranges.

Terion Moss, Portland 2018- Moss, who had an outstanding summer, continued his high level play throughout the showcase. He's a high IQ point guard who makes great pocket passes off the pick and roll and creates well off the bounce, with or without screens. Moss showed a new aspect of his game Sunday nailing numerous 3s with a much improved stroke.

Noah Bonsant, Erksine 2018- Guys make a living playing with a motor and Bonsant has an outstanding motor. He is extremely active on both ends of the floor but also has some skill. He displayed a nice touch from midrange and in the paint.

Edwin Ezedonmwen, Hyde Prep 2018- Ezedonmwen is an aggressive guard who can really shoot it off the bounce. He has a nice midrange and 3 ball game. When he has arc on his shot, he is almost impossible to guard since he also can take it to the rim and finish through contact.

Desean Cromwell, Biddeford 2018- Cromwell looks to be one whose best basketball is ahead of him as he is just beginning to grow into his 6'3 frame. He already posses a nice stroke from 3 and can create off the bounce.

Michael Gilman, Windham 2018- Gilman was one of the best catch and shoot shooters at the showcase. Gilman is a high academic student who should intrigue a lot of top academic programs in the coming years.

Colby Buckman, Brunswick- The 6'5 forward stood out with his activity on the boards and his ability to get to the rim. He played with an attacking style and projects as a player who will get to the charity stripe in high volume.

Noah Malone, South Portland 2018- Malone is a heady point guard who has great ball-handling capabilities that led to him scoring and creating for others.

David Keohan, Thorton Academy 2018- Keohan is a 6'4 forward with a nice motor and the talent to blow by guys off the dribble and finish at the rim.

Nolan Haggerty, Yarmouth 2018- An athletic 6'5 small forward who threw down some big dunks along with nailing some 3s. As Haggerty cleans up his handles and builds strength he should see his recruitment really heat up.

While our focus was geared largedly towards the upperclassmen at the event, a few of the youngsters managed to catch our eye. Hyde's 6'7 sophomore Christian Beeke is an intriguing big wing who can post-up as well as put it on the deck while Khalil Depass is a big and athletic guard who also suits up for Hyde. Portland's Trey Bellew hit from mid-range and three and appears to have his best basketball still in front of him. Greely's Logan Bagshaw and Deering's Celio Despacho were among the best freshmen in attendance.