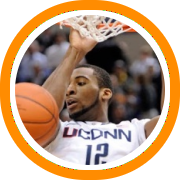 Kentucky is the top overall seed in the tournament and they feature a former New England prep product in Twany Beckham, who spent a year at the New Hampton School before moving on to the college ranks.

St. Mark’s alum and Rhode Island native Alex Murphy is in the midst of his redshirt season for the Blue Devils after suffering a concussion at the beginning of the year.  The Patriot League champions feature sophomore center Kevin McCarthy, who spent his post-graduate year at Phillips Exeter Academy in New Hampshire.

This match-up features two Canadian point guards who both have roots in New England prep schools.  Third seeded Baylor is led by another New Hampton product, Brady Heslip, who runs the show for the Bears and also serves as their leading three-point shooter while South Dakota State’s back-up point guard is former Proctor Academy guard Taevaunn Prince, currently averaging over 16 minutes per game for the Jackrabbits.

Two schools that have both shown a willingness to recruit the New England region in the past but currently lack representation from the region on this year’s roster.

Fifth seeded Wichita state was one of the premier mid-major programs in the country this year and West Springfield, Massachusetts native Joe Ragland is one of the Shockers’ top scorers at over 13 points per game.

Former Notre Dame Prep big man Khem Birch is currently sitting out for UNLV but promises to be an instant impact player when he becomes eligible at mid-semester of next year following his transfer from Pittsburgh.  Colorado isn’t without local connections of their own beginning with senior point guard Nate Tomlinson, who they plucked out of Lee Academy three plus years ago.  Colorado native Beau Gamble is also in his second season with the team following his post-graduate season at New Hampton.

The Fighting Irish were dealt a major blow early in the year when Farmington High School alum Tim Abromaitis suffered a season ending injury after earning pre-season all conference honors.  Notre Dame has defied the odds in his absence though with Massachusetts native and St. John’s Prep alum Pat Connaughton playing a prominent role as a freshman while Tom Knight, a product of Dirigo High School in Maine, also seeing consistent rotation minutes this year.  Xavier’s lethal backcourt of Tu Holloway (17 ppg, 5 apg) and Mark Lyons (15.5 ppg, 2.7 apg) both have roots in the region.  Holloway ran with the New England Playaz on the grassroots circuit while Lyons is a product of Brewster Academy, the same program that produced the team’s fourth leading scorer, Andre Walker.