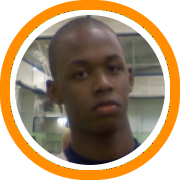 MB Nation is one of several New England teams to travel to West Virginia for the Hoop Group’s Triple S Harley Davidson Classic and on day one they sent shock waves through the sixteen-and-under field when they knocked off the New York Gauchos.

The Nation wasn’t even supposed to be in the same pool as the Gauchos, but had their schedule changed upon arriving at the tournament.  The Gauchos came into the game likely thinking they were in store for a blowout victory, but instead they found a team of long and skilled players from Maine who were riding a wave of momentum following their run to the finals of last weekend’s Hall of Fame National Invitational.

The star of the game for The Nation was Alex Furness who played most of the game at the point guard position with normal starting point guard Will Defanti out of the line-up.  Furness, normally a long 6’5” wing player, recorded a triple-double with 10 points, 12 rebounds, and 11 assists.

James Ek also stepped up for Maine knocking down six three-pointers and finishing with 20 points en route to the 69-58 victory.

Other News & Notes from West Virginia

•  Expressions Elite 17u team scored a blow out victory in their opening pool play game with Tyler Olander & Rod Odom getting profiled in the scout.com recap.

•  Nate Lubick returned to the Playaz line-up and apparently hasn’t missed a beat as he reportedly was quick to establish himself as one of the premier players in the field.  Naadir Tharpe returned in the Playaz second game of the day as well.

•  CT Gold South got a tough draw including a match-up with Kyrie Irving and the New Jersey Road Runners.  Incoming Cheshire Academy forward Matt Conway and Justin Kuntz were the bright spots as Conway scored in the mid-post with a series of turn-around jumpers and Kuntz passed well from the point and scored on a number of backdoor cuts.

•  Brewster Academy’s Melvin Ejim was followed by “Iowa State, Boston College, and a host of mid-major schools” according to scout.com’s Dave Telep.

•  Jason Perrier played a strong first half for Connecticut Elite, helping them to establish an early first half lead, but they gave it away in the second and dropped their first pool play game.