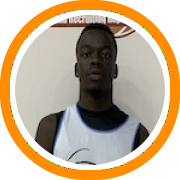 We’ll begin our recap in the senior class of 2020.

Logan Bagshaw, Greely High School - A very talented offensive player, Bagshaw has a game that should completely translate to the next level on that end of the floor. He shoots it, has size to score over top of smaller defenders, and just knows how to play between his natural feel for the game and learned basketball I.Q. Bagshaw has a D2 offer on the table right now from Dominican with a steady diet of additional scholarship level interest that looked more than justified from his showing on Sunday.

Jarell White, Hyde - An absolute man among boys, White is powerful and aggressive with the bounce to match and an unrelenting motor. His physical straight-line style won him the event’s one-on-one competition while he was no less dominant throughout the other competitive portions of the day. He already has D2 offers on the table with growing suitors from both the NE-10 and America East Conferences.

Mike Connolly, Westbrook - It is prospects like Connolly that we had in mind when we created the open gym series because he’s very talented with a lot of untapped potential still to discover and yet still under-the-radar. The 6-foot-7 lefty is mobile, athletic, has a frame to fill out, and a touch that extends out to the three-point line. He also plays hard and rebounds well. He may be an ideal post-graduate candidate but is a name scholarship coaches should be familiar with whether it’s in 2020 or 2021.

Angel Price-Espada, Hyde - What he may lack in size, he more than compensates for with his quickness and creativity with the ball. Price is a dynamic playmaker who essentially got wherever he wanted with the ball in his hands on Sunday. He plays with a pace and burst that was unmatched among the other lead guards and is another prospect that demonstrated clear scholarship caliber tools.

Gabe Wagner, Freeport - A strong and athletic southpaw guard, Wagner showed a lot of pop in his game on Sunday. He had some explosive drives and above-the-rim finishes but also elevated well on his jumper and showed scoring potential at all three levels.

Brian Austin, Scarborough - Austin was a pleasant surprise on Sunday. He may not have been the most explosive athlete in the field but he was skilled with good perimeter size, an ability to knock down shots, and an understanding of how to play -- all characteristics that translate to the next level.

Tucker Charles, Messalonskee - A true point guard with a good build, Charles sees the floor well, communicates, has a high basketball IQ, and can make shots off the dribble. He also uses his body well when handling the ball and provides a good rebounding guard on the defensive end.

Kyle Pasieniuk, Kennebunk - His strength and toughness are his calling cards as he plays with a consistently high-motor and energy level to compliment his physical tools. Pasieniuk also showed that he knows how to play and is capable of making shots off the dribble.

Luke Stovall, Scarborough - A scorer with good perimeter size at 6-foot-3, Stovall looked primed to take on a bigger role this year as he and Austin look to fill the void left by Nick Fiorillo’s graduation.

Jonathan Runnion-Bareford, Camden Hills - He impressed on both ends of the floor. Offensively, he showed off a tight handle and good first step to make plays off the dribble. Defensively he stood out with his ability to guard, and pressure, the ball.

Loki Anda, Deerfield - The 6-foot-5 southpaw is physically ahead of most of his peers with strong shoulders, a good build and athleticism. Beyond his physical tools, he can also take the ball off the defensive glass to start the break, attack in transition, and make enough face-up shots to be a versatile mismatch problem offensively.

TeAndre King, North Yarmouth - King is an athletic hybrid forward with a wiry, yet strong, frame and elastic body type. He has been working on expanding his game to the perimeter and it showed on Sunday as he demonstrated increased versatility without sacrificing his efficiency.