Local Prep Products Teaming up at Next Level 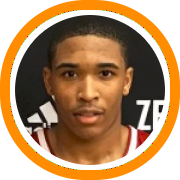 Dominican College, an NCAA division II school in New York, recently came into the New England prep ranks to grab two of the best guards left on the board.

First it was St. Thomas More guard Tyjon Gilmore who committed to the Chargers earlier this month.

A scoring guard originaly from upstate New York, Gilmore previously starred for Watervliet High School before enrolling at St. Thomas More. A longtime product of the Albany City Rocks program, Gilmore made a quick impact for the Chancellors this year as he shined at the National Prep Showcase in November by knocking down 7 three-pointers in a game against IMG Academy (highlights below care of stateyourname99 on YouTube). He continued to be one of the team's top scoring threats throughout the season.

Master's School post-graduate guard M.J. Richardson followed suit as his commitment to Dominican was announced Monday. Richardson put up some of the biggest numbers in New England this year as he stepped in to provide not only immediate scoring, but also leadership, on an otherwise young Master's squad. A New Jersey native who graduated from Teaneck High School in 2016 and previously starred with The Firm on the Adidas Gauntlet, Richardson had a number of huge games this season including the 31 point 11 assist effort captured by Mike Yagmin in February.

MJ Richardson is one of the most EXPLOSIVE SCORERS in New England! Scored 31pts w/ 11ast (1 turnover) in @TMSBBallcoach's win over St Luke's pic.twitter.com/7tDTzK07o3

Together this duo provides Dominican with a pair of guards who are both capable of putting points on the board in bunches and should be more than compatible next to each other given that they're both capable of playing on or off the ball.