Ledlum latest 1st year prep product to come off board 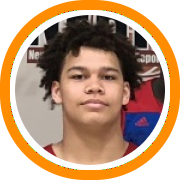 Northfield Mount Hermon senior forward Chris Ledlum became the latest first year New England prep product to come off the board on Thursday morning when he made a verbal commitment to Harvard University.

Ledlum is a four-star national forward who sits right on the cusp of the ESPN 100. His recruitment went to brand new levels last spring and summer when he took the Adidas Gauntlet circuit by storm with the New York Jayhawks, landing numerous high-major offers in the process from conferences including the ACC, Big East, and Big Ten.

Georgetown, Pittsburgh, Yale, and Harvard made his final four before committing to Tommy Amaker and the Crimson. Ledlum is now the 8th NMH product to commit to Harvard and 34th to commit to an Ivy League school in the last 11 years.

While this is Ledlum's first year in the NEPSAC, he is no stranger to New England. In fact, he was the MVP of the Super 16 Memorial Day Showcase last May when leading the Jayhawks to a share of the championship.

Ledlum is a physically strong and extremely tough combo-forward with one of the highest motors in the entire country. He plays extremely hard every time he is on the floor, is a natural leader, and is continuing to add to his all-around skill set.

Here's a look at some other first year prep products that have come off the board in recent weeks: