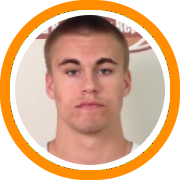 While Massachusetts certainly produced the most talent at last weekend’s Junior Elite 75 Showcase, New England’s other states had representatives of their own as there were a variety of talented young prospects heading to the high school level next year.

Here’s a look at some of the other top 8th graders:

Oumaru Kante- A strong, physical presence on the perimeter with a relentless scorer’s mentality, Kante will knock down shots in bunches from the perimeter and break people down off the bounce with a variety of tight crossover combinations in tight space.  In one sequence on Friday in which he showcased his enormous upside as a dynamic offensive talent, he shook his defender with a tight, in-and-out cross going downhill in the left seam, only to step back for a feathery 16-foot pull-up in front of a helpless hand to complete a mature offensive play with effortless polish.

Elijah Pemberton- Possessing terrific length and quickness to go with a polished offensive skill-set, Pemberton scored the ball in a variety of ways on Friday, attacking the rim from the wing with a series of explosive, left-to-right crossover combinations, knocking down open jumpers out to 18 feet, and scoring the ball with ease in transition off turnovers.  A versatile player capable of guarding multiple positions and scoring the ball from all over the floor, he projects as a dynamic playmaker with the natural physical ability to make the people around him better with terrific feel and creative, sound decision making.

Kyle Bouchard- One of the premier 8th graders in the state of Maine, Bouchard possesses a devastating combination of size and skill.  A powerful six-foot-five forward who can overpower his peers inside the paint, Bouchard makes the most of his size and strength by going right into contact and attacking the rim like a dump truck running down hill.  He also shows a soft mid-range touch that suggests he could eventually stretch his game to the perimeter and evolve into a true mismatch problem at the power forward position.

Kabongo Ngalakuondi- Athletic finisher who scores consistently through contact with either hand, rebounds in traffic and runs hard rim to rim to space the break.

Wenyon Gabriel- Aggressive finisher, crafty inside and uses both hands well. Very smart player, always in the right place to pick up loose ends on the offensive glass.

Sam Glazer- Solid off-guard with good shooting form and a nice midrange game. Does a nice job using his body to absorb contact when finishing.

Corey Daugherty- Quick point guard with a tight handle and a great feel for making plays in traffic, proved himself a solid distributor.

AJ Brodeur- Great size. Young big whose skill set is visibly developing, showed a willingness to work hard and run the floor, as well as a variety of nice back-to-the-basket moves on the interior.

Ryan Brown- Smart, crafty forward who scores the ball in a variety of ways. Uses his length to be very disruptive on the defensive end and active on the boards.

Manuel Peguero- Long wing who is at his best in transition sprinting the floor for easy buckets and a big time finisher with a full complement of fluid scoring maneuvers.

Wade Gop- Excellent defender and a solid floor general. Great feel for the game, plays within himself and makes very few mistakes.

Kaleb Lutton- Open floor playmaker who is a virtual one man fast break thanks to his end to end speed with the ball in his hands.

Arkel Lamar-Ager- A big guy with the ability to take the ball off the glass and start the break thanks to ball-handling and passing skills that are typically seen on guards.