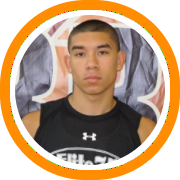 Yesterday we looked at the members of the 2012 class who came out of July having taken their recruiting stock to new levels.  Today it’s time to extend that view to the class of 2013.

Nerlens Noel and Deonte Burton were sensational throughout the month, both proving themselves to be among the elite talents in the national class.  Here is a look at others who sent their stock to new levels:

Garet Beal, Maine Mac – He may not have “blown up” to the extent of others on this list but suffice it to say that coaches have noticed his growth within the last year and are anxiously awaiting to see if that progress continues given his mismatch potential with his size and skill.

Jaylen Brantley, BABC – There may not have been a more high profile stock-riser in the first half of the live period as Brantley was crucial to BABC’s run to the Peach Jam title.  He reportedly picked up his first high-major offers as a result.

Cane Broome, New England Playaz – As an undersized scoring guard, Broome’s upside has always been questioned, but this summer Broome continued to score the ball in a multitude of ways while playing against a higher level of competition.

Andrew Chrabascz, BABC – He’s been one of BABC’s most efficient and important role players in recent years, but this month he took his game to another level, emerging as an offensive standout for the club at AAU Nationals and simultaneously likely pushing his recruitment to the next level.

Samuel Dingba, Westchester Hawks – Dingba was one of the big stories at this summer’s Elite 75 as his physical tools were unmatched inside the lane while his basketball skill set has come a long way since the end of the season, making him poised for recruitment from the highest levels.

Kahlil Dukes, Connecticut Basketball Club – A couple of months ago Dukes was a piece of CBC’s u16 puzzle, but this month he emerged as one of the primary offensive weapons for the u17 team, scoring a handful of early division I offers in the process.

Pete Miller, Middlesex Magic – He looked like the next in a long line of Ivy League big men to head to NMH but he showed some tools this summer that should at least get him some looks at the higher levels. Where he ultimately ends up is still up to him.

Sean Obi, Connecticut Basketball Club – Similar to Dukes, Obi was a staple of the CBC u16 team before getting the call to run with the big boys this summer.  He proved his worth too, being a valuable post presence off the bench and intriguing lines of coaches in the process.

Adrian Oliveira, New England Playaz – There may not be another underclassmen whose stock has risen more in the last month.  He had no significant division I interest to speak of only weeks ago and now has mid-major interest while drawing comparisons to Anthony Ireland.

John Powell, New England Playaz – He saved his best work for last and gave the Playaz u17 team a big boost in Los Angeles, using his length and mobility to make plays on the defensive end of the floor, and proving himself capable of impacting the highest levels of competition.

Colin Richey, Rhode Island Hawks – He was one of the big winners of Hoop Mountain’s Super Week II, as he continued to show the toughness and basketball I.Q. that have always been his trademarks in addition to some newfound explosiveness inside the lane.