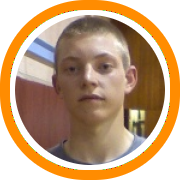 David Rufful came to Northfield Mount Hermon for one reason and one reason only, and that was to play his way into the Ivy League.  Before ever officially putting on an NMH uniform the Rhode Island native has already accomplished that goal after verbally committed to Dartmouth on Monday night.

“This is exactly why I came to NMH,” Rufful told the New England Recruiting Report, “Coach Carroll really pushed me to this point.”

Coming out of Bishop Hendricken High School in Rhode Island last year the 6’5” swingman had a variety of division II offers but no concrete division I opportunities.

But since arriving at NMH, Rufful has impressed college coaches with his powerful physique, deceptive athleticism, and always potent three-point touch.  While Dartmouth was the first Ivy League school to make a push for Rufful’s services they weren’t the last as Brown quickly followed suit and most recently the University of Pennsylvania brought him to their Philadelphia campus for a visit.  Ultimately however, the Big Green were able to get it done in what NMH Head Coach John Carroll describes as a steal.

“I have been here [Northfield Mount Hermon] for seven years now, and David is definitely among our most elite in terms of his character, academics, and basketball ability,” Carroll said.  “When you look at his complete package this is an absolute steal for Dartmouth.”

•  Josh Riddle is doing some incredible work in the weight room.  The Colorado native is said to have put on 22 pounds of muscle since arriving at the school in late August.  Riddle could follow Rufful to Dartmouth as the Big Green are said to be one of the leaders for his services along with Quinnipiac.

•  Junior point guard Ryan Peters is second in the weight room battle as he has added 18 pounds to his 6’3” frame.  Peters is also being recruited by a host of schools in the Ivy League.

•  In addition to making a verbal commitment to Dartmouth, David Rufful has also earned the best nickname on the NMH campus…Jason Bourne.  “It’s fitting,” said Coach Carroll “He turns any situation into a positive.  Even my wife calls him that.”