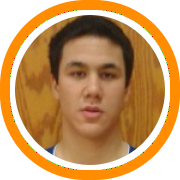 Marianapolis opened the day with a very strong showing, locking down Mount Zion defensively with their trademark 2-3 zone and riding the wave of Bobby Ahearn's offensive outburst to pull away down the stretch.  The Binghamton bound forward scored 11 of his 14 points in the second half, while sharpshooter Eric DAquanno continued to distinguish himself from long range with three longballs.

Unsigned post-graduate Aubrey Dawkins had his best showing to date with 18 points including a combination of deep jumpers and explosive finishes to lead New Hampton to the win.  Syracuse bound junior Tyler Lydon had his latest double-double with 15 points and 10 rebounds as Orange assistant coach Mike Hopkins looked on.

Vermont Academy was led by their sophomore backcourt of Bruce Brown and Christian Vital who finished with 18 and 19 points respectively.  Brown continued to standout with both his freakish athleticism as well as his defensive ability while Vital's best work came from behind the arc with five triples.

Worcester came out of the gates ready to go, knocking down three threes and opening with an 11-1 run.  The Bobcats fought back quickly though, setting the stage for a back and forth 40 minutes that wouldn't be decided until the final buzzer sounded.

Brewster was led by their backcourt tandem of Devonte Graham and Donovan Mitchell, who both finished with 17 points while also coming up with key plays defensively.  Isaac Copeland continued to show glimpses of his huge upside while Jarred Reuter and Kevin Zabo finished in double figures as well.  Matt Cimino had a terrific game for Worcester, dropping 21 points while proving his ability to operate with his back to the basket.  Devon Williams chipped in with 15 on the perimeter, including four three-pointers, many of which came at critical moments in the second half.

The defending Class AA champions seemed poised to run away with this one on a number of different occasions, but Bridgton simply wouldn't give in.  Rayon Miller and Joel Berroa led the way with 18 and 17 points respectively as Berroa showed an ability to make a number of physical drives through contact and Berroa mixed in his individual offense while running the point.  Jalen Adams scored 25 points to lead four players in double figures for Cushing while Connor Gilmore (12), Idris Taqqee (12), and Kaleb Joseph (11) also chipped in.

Ultimately, this game came down to the very last possession with Bridgton scoring consecutive three-point plays to erase a six point deficit in the final 30 seconds.  The only problem was the 5 seconds remaining on the clock and that proved to be all that Adams needed as he threw up an off-blance and contested 22 footer to beat the buzzer and give Cushing the dramatic victory.

Lee Academy held a double figure lead for the majority of the second half, fighting off a couple of different Tilton runs.  The Pandas were led by the inside-out tandem of Mihailo Vasic and Aaron Calixte.  Vasic had a game high 24 points while bringing a passionate approach to the game while Calixte finished with 17 while continuing to show an evolving understanding of how to run the team from the point.

John Witkowski did some very nice things for Tilton, showing off both deep shooting range and crafty maneuvers around the rim.  Terance Mann continued to fill all columns of the stat sheet, both scoring in double figures while also crashing the glass and forcing turnovers defensively.

Salisbury came out intent to set the tone early, and did just that despite playing without Samuel Dingba.  St. Andrew's battled back to knot the score at halftime and then gradually pulled away in the second half.  Tom Hunt scored a team high 15 points to pace the Saints while Bonzie Colson added 14 of his own.

Salisbury got good production out of their backcourt while playing without big man Samuel Dingba.  Marist bound guard K.J. Lee attacked the rim for 16 points while Ethan Feldman paced the club from beyond the arc with five threes and 21 points.

After a hard fought first half that saw both teams knotted at halftime, the home Saints were gradually able to pull away in the second.