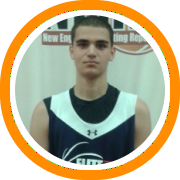 The Hoop Group might have been holding their annual Summer Classic East tournament just outside of Philadelphia, but there was a distinct New England flavor to the event.

That flavor began with East Coast Elite Massachusetts, who took the tournament’s 16u championship by knocking off another local club in the Rhode Island Hawks.

ECE Mass got balanced offensive production beginning with 13 points from Aaron Falzon.  Malik James chipped in with 11 while Jeff Spellman and Djery Baptiste each had 9 and Sammy Mojica had 7.

Falzon was the team’s offensive catalyst for most of the day, showing the inside-out skill that he has become known for, while Baptiste continued to anchor the team’s defense.

While the team’s frontcourt was critical to their championship run, it was their backcourt that came up huge in a dramatic quarterfinal win.  ECE trailed Team Philly with only ten seconds to play in the game until James showed ice in his veins by knocking down a pair of free-throws.  The Brighton guard followed that up by jumping the ball-handler and picking up a steal.  James found Spellman open ahead of him just in time to bank in a short jumper to beat the buzzer and give ECE the game winner.

As for the Hawks, they advanced to their second straight tournament final after having similar success last week in Springfield.  Henry Bolton kept the Hawks within striking distance in the second half of the final, scoring the majority of his team high 17 points with a series of tough jumpers.  Point guard Kealen Ives continued to run the show to perfection while also finishing with 14 points of his own in the final.

Jared Terrell and Abdul-Malik Abu both played well on Thursday, but it wasn’t enough to hold off a Jersey Shore Warriors squad that was on fire from behind the three-point line.  Terrell was attacking the rim for a variety of thunderous dunks before going down with an ankle injury while Abu was utilizing his power and athleticism to be a beast inside the paint.

ECE Mass continued to be the story in the 17u bracket, making a run all the way to the tournament finals before running into a talented Arkansas Hawks squad.  Jarred Reuter played a highly effective floor game, not just by scoring and rebounding inside the paint, but also facilitating with his passing ability for scoring guards like Aaron Calixte and Isaiah Lewis along with shot-makers like Robert Champion.

The Rivals scored an impressive win over New Heights to start their day.  The backcourt combination of Jalen Adams and Kaleb Joseph again played well as Adams made a variety of high level scoring drives to provide an offensive spark while Joseph continued to show his maturation at the point guard position.  Mike Leblanc had his second consecutive impressive day as well.

CBC Donnelly won three straight games on Thursday after suffering a disappointing loss on Wednesday.  Paschal Chukwu was the story as he continued to assert himself on both ends of the floor while Kurt Steidl also played extremely well.  Jeff Racy, Casey Woodring and Dominic Migliaro all shot the ball well from the perimeter.

Elsewhere in the 17u bracket Jared Wilson-Frame has another offensive outburst for CBC while Sam Donahue was drilling shots from long range for the Rhode Island Hawks.  Christian Ejigba showed well in the middle for New Rens Hargraves while Jason Boswell had a solid game from the perimeter.  Samuel Dingba appeared to be in mid-season form in his return to the Westchester Hawks, showing no limitations after last month’s shoulder injury.

Stay tuned to the New England Recruiting Report this weekend as even more local teams will be arriving for the upcoming Hoop Group Summer Classic East, which will conclude with championship games on Sunday.